I came home from work Monday night feeling pretty crappy; a cold had invaded my body, and I knew that I would be a teetotaler for the week. Steve doesn’t much like to have a cocktail by himself, but he thought that Monday night would be a good night for a hot toddy. A mid-fall chill kissed the air, and he was up for a comforting mug of hot whiskey. So, he walked over to the bar (I was in the kitchen boiling the water for his toddy and my tea) as we chatted about this and that, and, not really focusing on the task at hand, reached for a bottle with “Jack” festooned across the label. He proceeded to make his toddy: two ounces of whiskey, a teaspoon of sugar, and 3 ounces of hot water. Simple. Comforting. Old school.

Method
In a mug, add the whiskey, sugar, and water. Give it a stir. Enjoy curled up on the sofa with a loved one. (Make sure your loved one has a hot toddy as well.)

Usually the kitchen becomes redolent with the sweet caramel-burnished scent of bourbon once the hot water hits the whiskey-shot mug, but this time I smelled oranges. Steve put the mug ever-so-gently to his lips, blew a little to cool it down, and took the first sip, the one that is supposed to satisfy your expectations for wanting the drink in the first place. This time not a smile, but a wince, followed by a grimace, followed by “What the hell is this?” Ladies and gentlemen, I must take a moment to step outside the tale and proffer some friendly advice. Concentrate while making your cocktail, drink, potion, whatever. You don’t want the wrong spirit gumming up the works. For you see, Steve, thinking he had grabbed a bottle of Jack Daniel’s 7-year Tennessee whiskey, actually pulled a bottle of Yukon Jack off the shelf. For those of you who know the power of Yukon Jack, I’m sure you’re wincing along with Steve. For those of you unfamiliar with this spirit, let’s just start by saying that Yukon Jack calls itself “The Black Sheep of Canadian Liquors” on its label. Imported from Canada, Yukon Jack is a honey-colored liqueur that, upon unscrewing the cap, releases a sweet blast of baby-aspirin orange. Some may find this appealing. I, however, do not, for as a child riddled with fever, I loathed having to chew up four Johnson’s baby aspirins in order to abate my ague. (Once, I even dropped one to the floor thinking it would be forever lost in the shag carpet, only to be confounded by my father who later discovered it and brought it to my attention before my mom had a chance to vacuum.) Getting back to the tale, we tried to fix the mistake toddy by adding some Irish whiskey, but that didn’t help much. The drink ended up down the drain. Always a sad moment in the Cocktail Buzz Kitchen.

You’re probably asking yourself why we have a bottle of Yukon Jack in the house. Well, in full disclosure, I bought it on a whim one night while eying the shelves at Warehouse Liquors near NYU and thought I would give it a try. I do love to take a stab at creating cocktails out of misfit spirits and liqueurs. And also I read the product statement on the back of the bottle: “Yukon Jack® is a taste born of hoary nights, when lonely men struggled to keep their fires lit and cabins warm. Boldly flavorful, yet surprisingly smooth, there is no spirit like Yukon Jack®.” Hot. The thoughts of cowboys hanging out around a campfire, trying to keep warm while keeping each other company, was enough to make me whip out the credit card when the man at the register yelled, “Next!”

Now home, I had the bottle in my eager hands. Reading once again the label’s incantational pro–male-bonding words, I had a Brokeback Mountain moment, and thought fondly of Jake and Heath, in movie-lovers’ embrace, drinking whiskey from the same flask in the frosty Wyoming mountains. Smiling, I unscrewed the cap and took a whiff. Egad, what the hell is this? Turns out, Yukon Jack is not a real whiskey at all, but a 100-proof honey-based liqueur that is born in Valleyfield, Quebec, and makes is way into the U.S. by way of Hartford, Conn., where its bottled and then distributed.

Put off by the aroma, but inspired by life on the range, I decided to give it a go. What the hell, why not. Maybe something good can come out of all this sweet orangy syrup. Well, here goes. My thought was that whiskey was indeed needed to mix with the Yukon Jack, so why not use one of our favorite Jacks, Mr. Daniel’s. I knew that, based on the other ingredients I would add to the mix, these two spirits had to balance each other so as not to taste like grain alcohol laced with Kool-Aid. The first thing I thought of, to combat the sweetness of the Yukon Jack, was the bitter-orange brightness of Campari. The acidity in fresh orange juice would also cut through the alcoholic sugariness of the Canadian liqueur, so I added some of that, along with a dash of orange bitters, which would add another layer of what the Québécois would say je ne sais quoi. I then shook it all up in ice, strained it into a cocktail glass, and added a lemon twist. Voila! A sip revealed promise. So I quickly adjusted ratios and came up with a drink I was pleased with. I tried it on the rocks to see if I liked it more, and called Steve over to give it a try. Dangit, it was dee-lightful. You could taste the citrusy goodness that is inherent in the Yukon Jack, but when married with the tangy orange juice and bitter Campari, mellowed by the charred-maple sweetness of the Jack Daniel’s, a real cocktail emerged. We liked it better on-the-rocks, but I suppose it all depends on how chilly the evening is, cowboy. If you do drink it up, make sure you let the ice dissolve a little bit before you give it a vigorous shake. The water will help dilute the sweetness.

Method
Shake in ice for 15 seconds. Strain into a ice-filled rocks glass. Garnish with an orange or lemon twist, if led.

Upon further rumination, I liked the name even more. Jack and Jack is also a play on Jack and Jill, and thinking about the two Jacks running up the hill to fetch a pail of water, or driving a herd of sheep, I was content with the notion of bringing a little gaiety to our list of house-made cocktails. What the conservatives would call “spreading my agenda.”

Ladies and Gentlemen, our tale brings us to Connecticut, the land of Lucy and Ricky in the later seasons, where the rich park their carcasses after working long hours in Manhattan skyscrapers, where marriage between two men or two women is legal. An enlightened place, if you will. (Shame on you Maine for your bigotry. May you come to your senses, along with California and the rest of those other states in this great land, and realize that marriage is for all.) So we brought the recipe for Jack and Jack with us in our heads to the cozy town of Wolcott where my cousin Matthew and his lovely fiancée Kelly were to tie the knot by an idyllic pond. “Can you tell the bartender what kind of cocktail to make for us?” pled the newly wed Matthew, Kelly holding his hand, practically jitterbugging with her husband, both beaming in both connubial bliss and the expectation of a yummy cocktail. “I've got just the thing,” I promised them. So I sidled up to the bar and gave the man behind the stick the recipe for the Jack and Jack. “On the rocks.” It was a muggy June night and the ice would soothe the sultriness. They took a few sips and their eyes lit up more. “Thank you so much!” they cooed as a gaggle of bridesmaids whisked them off to the dance floor. Steve and I would join them anon. There’s nothing better than cutting a rug with the one you love at a wedding. 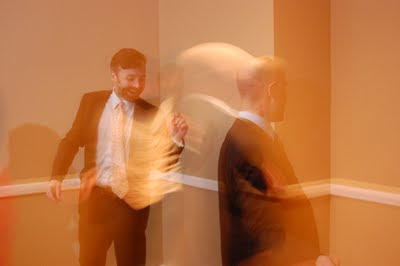 Sidebar:
At 50% alcohol, Yukon Jack will get you buzzed. This guy seems to love his Yukon Jack with his camping family. And this guy gets quite a jolt from swiggin’ some Yukon Jack (another camper . . . hmm). This young Canadian guy can’t seem to keep his shirt on, he loves his Yukon Jack so much.