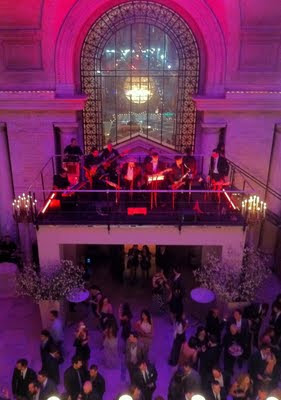 Nattily dressed imbibers bask in the pink and purple glow of the New York Public Library at this year’s Manhattan Cocktail Classic on May 13.

This year’s Manhattan Cocktail Classic gala was held once again at the New York Public Library. The weather cooperated fully as Mother Nature blessed us with a cool spring evening with no humidity. Hanna Lee Communications, led by the illustrious Hanna Lee, delivered us cocktail aficionados yet another extravagant kickoff to the spirits and liqueur seminars and events to take place over the next four days, during which cocktail-geek nirvana is sought. Upon entering, we rubbed shoulders with thousands of thirsty souls clambering for tens of thousands of well-crafted cocktails made from every spirit that ever dripped out of a still. And, if you could flag down a cater-waiter, you can nibble on tasty au courant morsels such as a marrow hors d’oeuvres, and the now ubiquitous steamed pork buns made famous by chef David Chang and his crews at the Momofuku restaurants.

We stuck with American Whiskey, as is our wont, and delighted in sipping Dana Hutty’s riff on a Manhattan cocktail using Russell’s Reserve rye (or was it Michter’s?). We followed that with a Maker’s Mark Manhattan riff topped with champagne in one hand, and, breaking tradition, a rum rocks drink in the other. Three drinks proved sufficient to bring a silly grin to our faces.

As we roamed the majestic hallways and stairways of this iconic building, we snapped a few photos on our iPhones. Take a look. [CLICK PHOTOS TO ENLARGE] 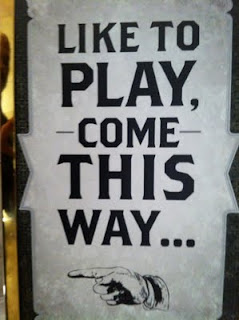 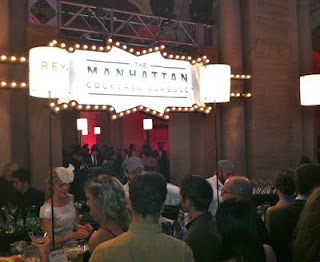 Enter at your own risk. If you can’t find a cocktail in five minutes, you’ve already had too many. 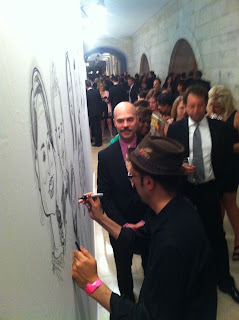 Paul decides to have his mug immortalized. 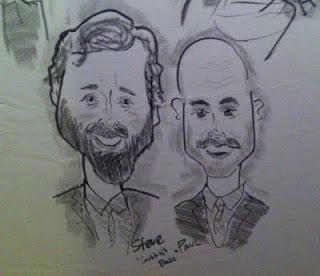 Do we really look like this after only one cocktail? 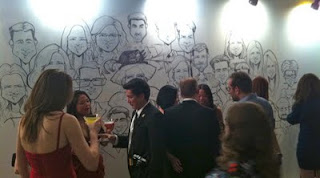 The faces of revelers, both real and drawn. 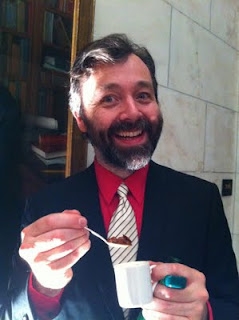 Steve noshing in between sips. 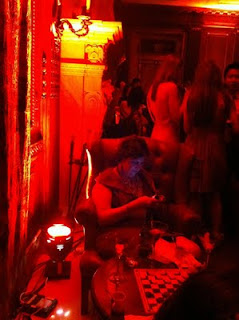 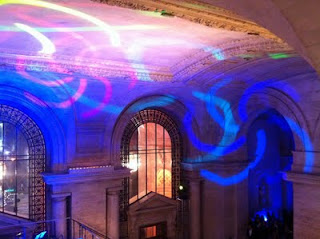 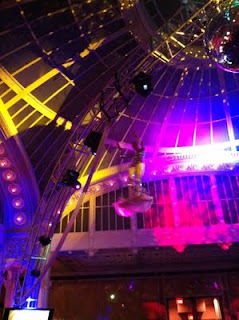 Aerial artistry above and below (watch video).

Get Ready for Spring Pea Guacamole 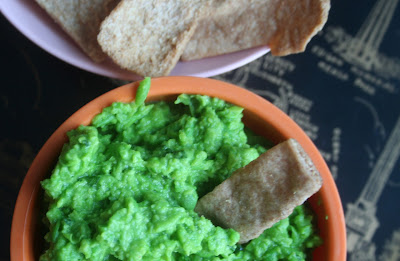 While traveling through Maui’s Upcountry, Paul & I stumbled upon a restaurant which occupied an old general store in Hali‘imaile, simply named the Hali‘imaile General Store. After a long day driving winding roads through incomparable beauty and cascading waterfalls, this was a fitting way to cap off a beautiful day.

We ordered a well-made cocktail with a little kick, their signature jalapeño margarita, which we accompanied with a red grape quesadilla festooned with dollops of spring pea guacamole. All delicious, but the Spring Pea guacamole was the recipe I kept thinking about and tried to re-create back home. With no idea to how it was made, experiments began. The original perhaps had some avocado in it, but I wanted to see if I could come up with a version that used only the freshness of spring peas, a simpler mix that would satisfy and refresh. The result couldn’t be easier, and a perfect companion for homemade tortilla or pita chips. 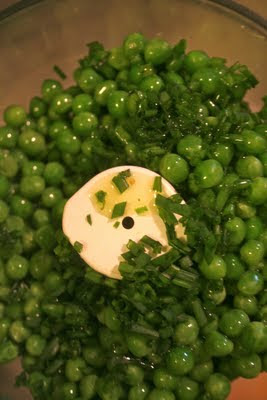 The French 75 cocktail—fizzy, lemony, and refreshing—turns out to be a perfect accompaniment to your Spring Pea Guacamole. Have some friends over this weekend, or make a batch for you and yours during the week. You’ll marvel at how the citrus and the champagne mingle with the taste of your springtime spread. 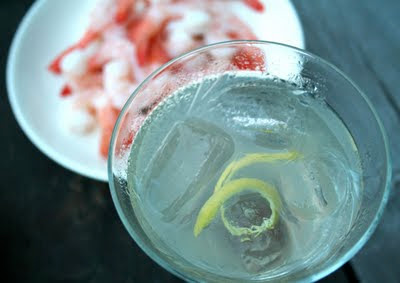 The French 75 will light up your life this spring, especially if you serve it with a side of Spring Pea Guacamole.
Posted by Cocktail Buzz at 4:25 PM No comments: 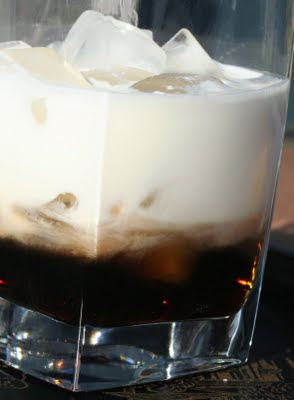 The Sombrero is a rich and sweet combo of coffee liqueur and dairy. After a few sips, you may end up with a milk mustache.

Cinco de Mayo (the Fifth of May) commemorates the Mexican army’s defeat of the French in Puebla in 1862, and is celebrated today primarily by Mexican-Americans, proud of their rich heritage. You can bet that Kahlúa will be involved in the festivities, especially when served with desserts such as those Mexican doughnut rods known as churros. Kahlúa, as you probably already know, is one of the most popular coffee liqueurs on the market. This Mexican syrupy tipple has been around since the 1930s and is an ingredient in a smattering of world-famous cocktails that rely on its rich coffee-bean essence, and its robust bittersweetness. Can you remember the first time Kahlúa touched your lips? Perhaps like Paul, you tried it for the first time in college, mixed with some milk plus a few ice cubes bobbing in the mix. Or maybe your initiation into the world of Kahlúa occurred earlier in life, as with Steve. His parents always had Kahlúa stocked in their home bar? Why? It’s an ingredient in Steve’s mom’s favorite drink, Kahlúa and Milk, aka a Sombrero. But did you know that any coffee-flavored cordial mixed with dairy is called a Sombrero? Try it with cream or half and half, and its rich velvety goodness ventures into the realm of liquid dessert.

Ingredients
2 ounces coffee liqueur (such as Kahlua) or coffee-flavored brandy
1–2 ounces or more milk, cream, or half and half (your preference on amount and type)
ice

Method
In an ice-filled rocks glass, pour the liqueur first, then top with the dairy. Stir if you like.

Like cream? So does your Sombrero. Add as much as you desire.

Sombrero sounds so much nicer than Kahlúa and Milk, though we suppose the Kahlúa people would disagree. It’s a decidedly “light’ drink in terms of its alcohol content—it sports half the proof of most spirits, such as vodka. We understand that sometimes you want a little more hooch in your beverage, and that’s where the vodka comes into play. By adding vodka to your Sombrero, you’ve just created a White Russian, a drink immortalized by Jeff Bridges’s “The Dude” in the Coen Brothers’ flic The Big Lebowski, a wacky mistaken-identity romp whose primary location is a bowling alley. We think it’s time you take your White Russian to your local oak-laned alley and get busy.

And for those drink enthusiasts who are lactose intolerant and don’t have a Lactaid pill handy, there’s always the Black Russian, whose provenance dates back to a 1949 Belgian bar.