A New Cocktail for St. Patrick’s Day, with Raspberries!

A Cox or two will do you just fine this St. Patrick's Day. The Erin Cox Cocktail will make your Irish eyes smile.

About a year ago, our friend Erin came over one night for drinks and dinner, and like any good guest, brought with her a bottle. Instead of wine, she held some Mathilde Raspberry liqueur in her hand and said, “I hope you don’t already have this. I knew I was taking a chance with you guys.” We must have conjured up the luck of the Irish, because we didn’t have any raspberry liqueur, aka framboise, anywhere in our house, except for a few drops of Chambord left in a nip bottle.

Delighted, and knowing that the liqueur was highly regarded by many in the “drinkworld,” we set out to make Erin a signature cocktail using the Mathilde framboise. We knew that whiskey of some sort would be the main spirit, seeing as how Erin, a born-and-raised Southern gal, loves her liquor aged in oak barrels, especially bourbon. We’ve been know to throw back a few with her and this seemed like a no-brainer. (She did, however, relate the tale of her and a friend who would get together in her early days of living and working in New York for some wild night fueled by Irish whiskey. We’d keep that bit of info on the back burner, just in case . . . .)

Raspberry and bourbon can make difficult playmates: when mixed, both tend to create an aura of sweetness that can be cloying depending on what else goes into the mix. For some reason, Paul got in his head that the much-aligned liqueur amaretto and the sweet and slightly sour licks of orange juice had to insinuate themselves in the equation (if you’re familiar with the drink called a Bocce Ball, you’re probably wondering why in hell would he want to do that?).

All we cared about was making Erin’s drink taste great. So we decided after much sipping that the orange juice had to go. Eighty-sixed. But we needed some acid to break up the sweetness that blossomed when the raspberry liqueur mingled with the burnished-almond sweetness from the amaretto, in this case Lazzaroni. So in went some Punt e Mes, a more bitter sweet vermouth, and that seemed to do the trick.

But when Erin came over, at the eleventh hour, we created two drinks for her: one with bourbon, and another with Irish whiskey. After a sip from each, Erin decided that the Irish whiskey drink tasted better. Another round led into her tales of living in NYC, sipping on Irish whiskeys with her friend from work at some local Irish Pub, perfect for camaradarie, solidarity, commiseration.

We give to you this St. Patrick’s Day, the Erin Cox, which incidentally means Irish Coxswain. She steers the boat and calls all the shots. And, she’s one helluva dame.

Erin Cox
(created by Cocktail Buzz, with the participation of Ms. Cox)

Method
The Erin Cox is perfect before or after dinner, or any time in between. Shake all the ingredients in ice for 15 seconds. Double-strain into a chilled glass (try not to get any raspberry seeds in your drink). Garnish with a fresh raspberry.

Posted by Cocktail Buzz at 9:59 AM No comments: 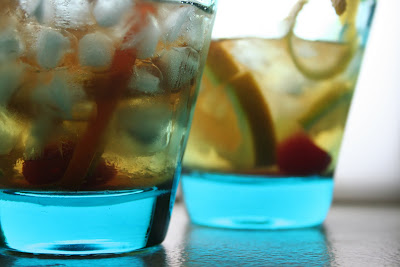 The Old-Fashioned is one of the most popular bar drinks, though recipes vary widely from bartender to bartender.

Never underestimate the power of a simple drink. The Old-Fashioned, or Old Fashioned, sans hyphen, if you wish, is one of the six basic drinks in David A. Embury’s classic The Fine Art of Mixing Drinks. At its most basic, it is a rocks drink made with nothing more than an American whiskey, such as bourbon or rye, and a sugar cube doused with bitters. Twist a lemon over it, and you’re done.

You look confused. You say you distinctly remember your last Old-Fashioned having an orange slice floating on the top of the ice, donning a neon red maraschino. Truth is, there are countless recipes for the Old-Fashioned, and everyone likes hers or his uniquely. The self-proclaimed Purists eschew all traces of fruit, and prefer their Old-Fashioneds pared down to the basics. The self-proclaimed New Purists add fruit, such as orange and cherry, but decry its muddling. Those who enjoy rococo presentations, we’ll call them the Revelers, love all the fruit muddled, and even a splash of soda on top. (This would be anathema to both Purist and New Purist.) Never has a drink inspired so much brouhaha.

We do have a standard way we enjoy our Old-Fashioneds, and probably would align ourselves with the New Purists. But we’ve got to say, in the hands of the right bartender, a fruit-free Old-Fashioned is a study in balance; contrarily, a muddled Old-Fashioned can boast layers of deep flavor. Regardless of how you like this drink, what’s probably most important to you is the ratio of whiskey to sugar. The sweeter your drink, and if with muddled fruit, the better it’s going to pair with salty and rich appetizers such as barbecued chicken on skewers, or ones that have a nice portion of grilled steak. The following is our go-to recipe for the Old-Fashioned. Normally, we use rye or bourbon, usually at a proof between 90 and 110 when we’re drinking it without an accompanying app. (Try between 80 and 90 proof when you want to pair with food.) Also, Angostura bitters is standard in our home, but we dance all over the barroom floor and have been known to use other brands of aromatic bitters, and orange bitters as well. Feel free to embellish at will. After all, getting to the bottom of how you like your Old-Fashioneds is one of life’s delightful dilemmas. 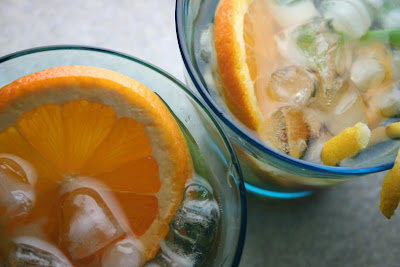 Method
Place a sugar cube in a rocks glass and douse with bitters. Add 1/2 teaspoon water and muddle until the sugar cube has broken apart. Fill with ice cubes. Meanwhile, shake the whiskey and bitters in ice and strain into the glass. Add the orange and cherry. Twist lemon over the glass and drop in. Add a small straw.