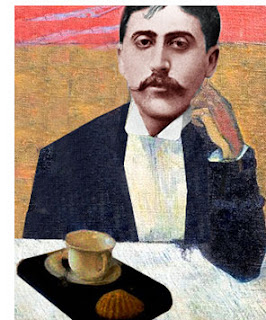 Steve and I are like the Spanish: We eat supper late—sometimes as late as 10:30PM. There are several reasons involved in our delayed prandial fulfillment. (1) We usually don’t walk through the door until most Americans have already eaten their grub and parked themselves in front of the boob tube (we’re smart: we combine these two pastimes). (2) We usually like to chat about our days while enjoying a cocktail, and perhaps a little nosh. (Sometimes we split a cocktail. This is known as a “splitty.” You can apply this catchword to anything bibulous that is split between two people, viz. a Manhattan, a muffin, a Carnegie Deli tower-of-pastrami sandwich.) (3) We like to cook, so when ordering in sounds unappealing, we scour the cupboards, freezer, and fridge for inspiration.

Last night inspiration seemed to ooze from the cupboards and fridge. (The freezer is usually a not-so-friendly appliance at 9:30PM. It takes a long time to thaw a pork loin.) After a Black Hawk Cocktail—a slightly tart simple drink made with bourbon, slow gin, and lemon juice—we experimented with some more whiskey, namely Jack Daniel’s, to come up with a drink for my friend Bruce who came up with a great name for a drink: The Preening Ass. I recently had an authentic Mexican dinner with Bruce, and told him about the joys of Catdaddy Carolina Moonshine. Bruce is mainly a wine drinker, but the idea of sweet, custard-tasting Catdaddy really appealed to him, and since Bruce works in advertising, he’s always bouncing around names and phrases to catch one’s attention; ergo, The Preening Ass.

So last night, Steve and I set out to make a Preening Ass. But what makes an ass an ass? A buck has ginger ale, a mule ginger beer. Well, an ass is sort of like one of these animals, so it should have something fizzy, no? We decided lemon soda would fit the bill for no other reason than it sounded posh, and a preening ass would definitely want something posh in his drink. There was some limonata (lemon soda) in the mini fridge, so we were in luck. But Catdaddy Carolina Moonshine sounds anything but posh. Were we barking up the wrong tree? Hells no! The fact that our ass is preening shows you that, in a Psych 101 context, he’s hiding something. Maybe he grew up in the Deep South and on his entrance to Princeton University he wanted to hide his provenance. So he started to preen and primp, lost his dialect, and whammo, he became the Preening Ass. Tennessee borders North Carolina (the state of Catdaddy’s origin), so adding Jack Daniel’s Tennessee whiskey seemed appropriate. Finding the right ratio was pretty simple. Add some ice, give a little stir, and sip. Not bad for a fit of inspiration. (Let it be known that we are in no way disparaging the Deep South or Princeton University. We like them both.)

Method
Shake in ice for 15 seconds and strain into a chilled coupe or cocktail glass. Add cherry.

Method
Fill double rocks or highball glass with ice. Add the Jack Daniel’s and Catdaddy. Stir to chill. Top with limonata. Give another quick stir.

So now that the drinking portion of the evening made us happy, we decided it was high time to move on to a proper meal. It was already 9:30 and nothing was thawed. Usually when this happens we get on the phone and order some pizza or Mexican. But we were in the mood for something home-cooked and comforting . . . that reminded us of chilly nights growing up when Mom knew just the right thing to make our tummies happy. A tostada smothered in shredded iceberg wasn’t going to do it (and besides, we had one the night before). Quickly we scoured the kitchen: some leftover ciabatta about to go stale was hanging out on the counter in an anonymous paper bag. We then opened the fridge hoping for something tasty: sharp cheddar in the cheese drawer, some leftover canned tomatoes (can you already figure where I’m going with this?), some prewashed baby greens Steve picked up from the grocery store, radishes, lots of butter, a little heavy cream. I then reached for the new nonstick frying pan that Steve’s mom got him for his birthday this month, as well as a sauce pan, and we started making a mini feast: grilled cheese, tomato soup, and a side salad. The perfect late-night supper. Actually, the best supper of all time. And it’s [gasp] vegetarian. Like a Proustian madeleine, memories of eating simple, nourishing food with our families flooded us as we supped to images of the Atlanta Housewives reunion on the tube.

Method
In a frying pan, melt the butter over medium-low heat, careful not to burn it. Lay the cheese between two slices of bread and place in the pan. Turn the heat up to medium and sprinkle with salt and pepper. If you have a grill press, lay it atop the sandwich. If not, give the sandwich a good press with a spatula. Grill for about 3 minutes, checking the bottom with the spatula to see if it’s golden brown. Flip and grill for another 2 minutes. Add more butter if necessary. Plate and slice in half, if you so desire.

Ingredients
8 ounces whole tomatoes from a can
1 tablespoon heavy cream
1/4 cup water
salt, pepper, and hot paprika (or cayenne), to taste
leftover ciabatta, cut into cubes or ripped into pieces

Method
Heat tomatoes in a saucepan. When the liquid starts to bubble, use an immersion blender to whip them up. (If you do not have an immersion blender, you can use a countertop blender before you heat up the tomatoes.) Add cream, water, and spices, and heat for a few minutes while stirring occasionally. With any leftover ciabatta, toss pieces into the frying pan with the butter you used for the grilled cheese. Let the pieces soak up the butter and flip when they become golden brown. Sprinkle with salt, pepper, and hot paprika and remove from heat. Garnish soup.