A hand-cranked apple peeler: Thank you for making pie-making a breeze.

This Thanksgiving we spent our time together, as we always do, but with no guests at our table. Last-minute changes afforded us the opportunity to sit this holiday with just each other. Instead of scrambling to find some hot new recipes using outré ingredients, this year we decided on a simple bill of fare: cook what you know, and don’t use any recipes except the ones in your head. We came up with the basic shape of our meal through chit-chat and cocktails days before the feast, and decided that spending the least amount of money to make great “traditional” dishes was the way to be Zen about all this. Here’s what we made:

We took our time making the meal. To say that it took all day would not be a lie, but it was a nice way to spend the holiday. Leisurely we sipped some Sofia Mimosas with Galliano with an easy lunch of bacon and eggs. The new Galliano L’Autentico has fewer vanilla and more spice notes than the older version, and it provided a zippy contrast to the orange juice and the blanc de blanc bubbly in a can we love so much.

Method
In a mixing glass, chill the orange juice and Galliano by stirring in ice for about 20 seconds. Strain into a champagne flute. Top with champagne.

The first dish was so simple. Cranberry Sauce. All you need to know how to do is boil water and make sure you have some sugar handy. And homemade looks a hell of a lot prettier in a serving dish than the blob that lurches out of a can. The whipped potatoes involved boiling water as well, but a little butter and heavy cream helped them achieve their full potential (though we didn’t overdo the butter and cream this year). The sweet potatoes and parsnips were roasted in the oven, all wrapped up in aluminum foil before being subjected to a good whipping with, again, a little butter and heavy cream, plus a sprinkling of nutmeg and brown sugar for some fall sweetness. With all this starchy goodness, we needed to counterbalance with something green. We both love green beans and were toying with the idea of making green bean casserole, replete with savory, creamy mushroom sauce and crispy wispy onion rings, but that mouth-watering description took away from the “green” aspect of what we wanted, sort of like when you’re on a diet and insist on just the salad bar, but then end up eating half the tub of macaroni salad. So we agreed on blanched green beans, further sauteed with some chopped almonds and fresh herbs, like thyme and marjoram.


Laying the foundation for stuffing with sauteed leeks and celery.

Steve’s favorite Thanksgiving dish is stuffing. He makes it every year, and loves to use sausage. It’s such a mish-mosh dish, a mongrel made with what seems like leftovers: stale bread, scraps of meat, some root vegetables and an onion. This year’s stuffing was onion-free, though leeks (which we’ve been cooking in almost every meal lately) and celery were the foundation upon which were laid savory cornbread croutons, apples, and little bites of hot and sweet Italian sausage. Baked so that its crusty top gives way to a slight pillowy interior, this stuffing was even further enhanced with a little slathering of gravy.

Ah, the gravy. So important. Do not trifle with gravy or the lit-up faces of those sitting at your table, admiring the gorgeous yet tasteful holiday tablescape it took you three weeks to design and shop for, will turn into sullen looks of unfulfilled dreams. The gravy this year was easy, and for one reason only: the turkey drippings were a’plenty. Why? Well, we like a moist bird (who doesn’t?), so we used a giant plastic bag in which to cook the bird. Instead of following manufacturer’s instructions, we didn’t poke holes in the bag to allow steam to escape from the air surrounding the bird. We let the air in the bag inflate as the bird cooked, and essentially it slowly did a poach-and-braise kind of thing, while still browning. At the very end, we poked some holes in the bag to let the steam out and cooked it until it reached a perfect 165˚F. When we plopped it on the carving board to rest, it looked beautiful.

Paul does the carving, and this year’s 14-pounder gave in easily to the blade. The white meat was succulent and had hints of celery and onion, which we had stuffed in the bird’s cavity. The dark thigh meat was tender and had a pleasant gaminess. The gravy added a light richness to everything it touched. Suddenly, the bird, which is supposed to be the center of the banquet, earned its place.

But we’ve forgotten one important piece, that which completes any holiday meal . . . the pie. With apples we got from the farmers market and some Granny Smiths we picked up at the grocery store, Steve whipped up some pie crust while Paul mixed some cut-up apples with spices (mostly cinnamon, with some ginger, mace, nutmeg, and allspice) to make the filling. The results, heavenly.


Apple pie is easy. All you need is motivation.

Cleanup’s a breeze when you have no dinner guests, and even though we didn’t start eating until 9PM, we were all scrubbed, dried, and put away before midnight, enough time to relax with the remains of our Thanksgiving cocktail, The Wink. The Wink is perfect for an all-day event like Thanksgiving. It’s mostly Moscato d’Asti, a sweet and crisp white wine, with some Pear brandy and a dash of celery bitters to temper the sweetness. Refreshing, not cloying, and easy to make, you can keep your party happy with chilled bottles at the ready.

The Wink
(created by Cocktail Buzz)


The three ingredients that make The Wink.

Even though we took our time preparing the feast, our dogs were bone-tired by the end of the night, and after the last bite of apple pie, we slipped into a sugar-induced sleep and dreamed of leftovers. Our big leftover plans included turkey barbecue sandwiches (delicious on challah rolls with a topping of Japanese turnip and celery slaw) and Turkey Tetrazzini (on the menu today), but other leftovers lingered in the fridge waiting to be cast in a new role: the mashed sweet potatoes and parsnips, the stuffing, the Moscato d’Asti. It reminded us of our food challenge last weekend in which we wrote down on slips of paper items in the freezer and cupboards that were neglected and needed to be used in a creative dish. 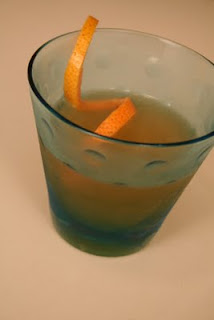 So we decided to do the same with neglected items in our bar to make a new cocktail. Each of us wrote down three possible items to use as an ingredient in the cocktail, folded the little slips, and proffered them to the other for opting. We then decided that we would join forces to create one cocktail combining the items we each picked. Steve got Xanté (pronounced sawn-TE, but with a French nasal twang), a pear liqueur made with cognac and hints of vanilla, and I got Moscato d’Asti. Hmm. This sounded familiar, almost like the ingredients for The Wink, with the sweet ultra-pear aromatic rush of Xanté substituting for the subtler pear brandy. Xanté is a tricky liqueur to mix with; it’s 38% alcohol by volume and has a very strong personality—it can easily insinuate itself as the life of the party, but we wanted to create something a little tamer, something that your guests could sip on all night without stumbling and falling into your crystal decanter collection. We had a red grapefruit, so we mixed some of that with the Xanté and topped it with the Moscato d’Asti. Done. We even played with ratios, but found that our instincts on our first try were correct. This drink is easy-peasy to make and you can preshake your Xanté and red grapefruit juice and keep it chilled in a bottle alongside the bottle of Moscato d’Asti. Just write down the proportions for your guests, and they can make one themselves. Some people like a garnish, so make sure you have a few grapefruit twists for them to decorate their glasses. The smell of the twist along with the pear fragrance of the Xanté is rather enticing. Here’s to Thanksgiving leftovers. Cheers!

Method
Shake the first two ingredients in ice vigorously, so that little ice shards are created. Strain into chilled glass. Top with Moscato d'Asti. Garnish with grapefruit peel, if desired.

Posted by Cocktail Buzz at 4:57 PM