From Ginger to Cinnamon to Galangal: Traversing the Globe in Search of the Right Amount of Spice for Friday Night Drinks, Dinner, and Dessert

Friday night is pizza night. You know the drill: one of you picks up four different slices from your local pizzeria; the other makes cocktails, which sometimes linger well into pizza time.

This Friday was different. Steve made, to my amazement, what could only be called a glorified vodka and soda.* Of course he had to make it special, or why bother?


* The following is a short rant against the vodka and soda, the most boring, stupid, worthless cocktail in the world: It means you want to get drunk and you don’t care how you get there. You might as well hammer a sign to your forehead saying I enjoy the taste of nothing. Why are you cock blocking your taste buds? You’re having a drink; why not actually taste and enjoy the spirits you are imbibing . . . okay, I’m done kvetching—for now.

Steve chose vodka as his base Friday night because he didn’t want to get whiskey-tired. It’s the perfect spirit to mix with when you still have dinner and dessert to contend with. So after he handed me the highball and I tried it, I said, “Wow, that’s really good. A little spicy. What did you put in it, besides the obvious?”

“A little ginger syrup we already had in the fridge and a lot of lemon juice.”

(So, It really wasn’t a vodka and soda. But I’m not sorry for the rant.)

Steve doesn’t like his drinks too sweet before dinner. But he does love sours, with just the right amount of sweetener so you still get that pucker after you take a sip.

Method
Shake the vodka, lemon juice, and ginger syrup in ice for 15 seconds. Strain into an ice-filled highball glass. Top with soda.

Ingredients
1 piece of fresh ginger, about 8 inches
2 cups of sugar
2 cups of water

Method
Wash then mandolin or thinly slice the ginger (no need to peel). In a medium saucepan combine sugar, water, and ginger. Bring to a boil, stirring, until sugar has dissolved. Reduce heat and simmer for about 15 minutes. Be careful not to bring to a roiling boil at this point as this will cause the syrup to harden. Allow to cool with ginger in syrup. Strain into jar. Press down on ginger to get all the syrup out. This keeps for about 1–2 weeks, and longer if you add a tablespoon of vodka or other spirit.

The ginger stimulated our appetites, so after a few of those fizzes, we decided to make dinner. Steve found a recipe in Cook’s Illustrated, July/August 2016, for the classic Mexican dish tinga de pollo and riffed on it. Normally, you plop the shredded chicken—cooked with cinnamon, cumin, and chipotle chiles in adobo sauce—on a corn tortilla, but since we only had flour tortillas, tacos transmogrified into burritos. Each spice had its moment to shine, but ultimately the smoky adobo sauce makes the dish. You get addicted. Sour cream and lots of Cotija cheese are good foils for the piquant heat of the chiles in the adobo, so we added the sour cream for its cooling effect and the Cotija for its funk. As burritos, they are filling, so we stopped after one, knowing full well that dessert was just a belch and an expectant smile away. 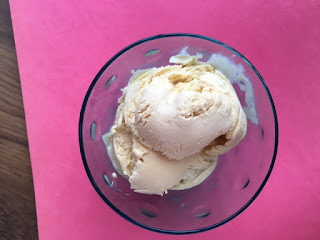 And so dessert. I actually made something I had been pondering for several weeks: galangal ice cream. Just to make sure I wasn’t barking up the wrong tree, I googled galangal ice cream and found one recipe, on the New York Times Web site, then riffed (riffing is a common theme in our kitchen). For those of you new to galangal (pronounced GAL-in-GAL), it’s a rhizome similar to ginger but not as spicy. When you take a whiff of one of the gnarly bulbs, which look like the shiny, articulated segments of a giant insect, you instantly smell camphor, with an undertone of sweet mustard. How can this possibly make for a delicious ice cream? Well, when you add the divine Hawaiian lehua honey (I also used honey from its relative the New Zealand rata) and an udderful of cream and milk, you can’t lose. If you can find fresh galangal (look in Asian markets) and you own an ice cream maker, I say go for it. When you serve it, grab some gourmet—or, better yet, homemade—cookies and make some sandwiches.

Method
In a medium saucepan, combine the milk, heavy cream, honey, sugar, and galangal. Bring to a boil and immediately remove from the heat. Allow the mixture to cool, then transfer to a covered container. Refrigerate at least eight hours, or overnight, to infuse the flavor of the galangal.

Place the egg yolks in a medium bowl, whisk until blended, and set aside. Return the galangal mixture to a metal bowl placed over a pot of boiling water (make sure the water level does not reach the bottom of the metal bowl filled with your mixture; I like to use a medium-size “industrial” salad bowl that hangs well over the perimeter of the pot below, so I can easily manipulate the bowl; however, if you have a double boiler, use the double boiler) over medium-high heat, bring to a simmer, and reduce heat to low. Slowly mix about a cup of the hot galangal mixture into the egg yolks. Add the yolk mixture to the bowl. Cook over low heat, stirring slowly, until the custard has thickened enough to coat the back of the spoon. Remove from the heat.

Strain the custard into a mixing bowl, and place in a container of ice water to cool. When the custard is chilled, freeze in an ice cream maker, according to the manufacturer's instructions.