October Is the Coolest Month

For those of you who live in temperate climes, we are deep in the throes of fall and what better way to enjoy the chill in the air than with a cocktail or two. And so far, October has proved to be a harbinger of good things to come in the very near future, so if you need to continue to three or four cocktails, we won’t stop you (unless of course you are trying to get behind the wheels of a motor vehicle).

1. The Manhattan Cocktail Classic Preview grand gala on October 4 was held at the New York Public Library. Eleven makeshift bars in various locations in the main lobby, halls, and mezzanine touted specific liquors (such as Tanqueray, Don Julio, and Hendrick’s) and boasted some of New York’s most creative men and women behind the stick. According to the Web site:

“Thee Manhattan Cocktail Classic is New York City’s first ever multi-day event celebrating the history, contemporary culture, and artful craft of the cocktail. Part festival, part fête, part conference, part cocktail party, the Manhattan Cocktail Classic brings together the unparalleled talents and opportunities of the bars, bartenders, and restaurants of our great city for five days of activities, both educational and celebratory in nature, championing the common ideals of authenticity, equality, sustainability, service, and pleasure. (There will be some drinking involved, too.)”

We were invited by PR superwoman, Hanna Lee (a vision in a red cocktail dress) who, along with an advisory board of cocktail luminaries, a smattering of New York city bars, and other PR firms, managed to create an aura of old-school celebratory big-band imbibing on a truly orgiastic scale. We ran into the lovely Ana Jovancicevic, from Handcrafted PR, who looked stunning in turquoise (Ana always looks stunning no matter where you see her), and who was responsible for procuring the gargantuan portions of food festooned throughout the library: Henry VIII–sized roasted turkey drumsticks, whole suckling pigs, an endless supply of oysters. At the oyster bar, we chatted with Jaime Salas, Tres Generaciones Tequila Ambassador. We also ran into Dan Warner, Beefeater Brand Ambassador, who the night before made us some delicious drinks at the new Crosby Hotel to celebrate Gary Regan’s new book, The Bartender’s Gin Compendium. The possibility of food running out seemed very slim, as well as alcohol. Some of the drinks we had were insanely good, such as the Brooklyn made with Maker’s Mark bourbon. As we moseyed upstairs to the mezzanine, we spotted Lynnette Marrero who whipped up a Liberty Cocktail for Steve (Zacapa Rum, Applejack Bonded, Demerara sugar syrup) and Toby Maloney who rinsed, sprayed, and stirred a Hungry Manhattan (Bulleit bourbon, Punt e Mes, Zwack, Campari, Angostura Bitters, Lagavulin rinse) for Paul. Both drinks were simply excellent, and no wonder. Their base spirits (Zacapa Rum and Bulleit Bourbon) are some of the best of their kind.

Before we left we chatted with some more friends from the cocktail biz: Danny Ronen, writer, consultant, and ginger-promoting ambassador to Domaine de Canton; Blair Reynolds, Portland, Oregon, cocktail expert; Damon, the man behind the bar at the delicious-in-every-bite Prime Meats in Carroll Gardens, Brooklyn. No one’s hands were empty; everyone seemed happy as a clam.

We even ran into novelist, Gawker contributor, and Dazzle Dancer Mike Albo and his friend Kimberly Sexton who is developing her own line of skin care using cacao. A marriage made in choco-heaven! As Mike and Steve chatted about this, that, and the other thing, Kimberly slipped Paul a sealed syringe bottle filled with Daniel Preston’s secret cacao-based spirit, aged one year in an American Oak barrel. We later made a drink with it after a few taste-tests, and ooh boy, this stuff is good. We look forward to hearing more from Daniel Preston and his Brooklyn Cacao in the near near future.

All in all, it was lovely, decadent, and mirthful, and if this was billed as “Preview,” what insanity can we expect from the real deal in the Spring? We can’t wait!

If you want to check out some more great photos of the event, click here.


Liqueur d’Orange and Rouge, from Combier.

2. Combier is releasing two new bottlings, Royal Combier and Rouge, and we were on hand at Dutch Kills in Long Island City, Queens, to taste their exquisite Frenchness. Ah, Combier. We love it in a Sidecar. We knew we’d love the new stuff. And that we did. The Royal Combier is sure to rival its competitors in the Cognac-based orange liqueurs, and the Rouge—let’s just say that there is not another cherry liqueur that tastes so, well, so darn cherrylike. And we’re talking real fresh cherries, not the not-so-fresh cherry flavor in those syrupy old-fashioned cherryesque liqueurs. We can’t wait to start mixing with it!


The men behind Combier: Scott Goldman and Frank Choisne.

And do visit Dutch Kills. There is a long bar at which to ogle the sleight-of-hand prowess of bar masters, such as the estimable Giuseppe Gonzalez. And if you want a more intimate setting (with a date, a loved one, a business partner), dark and sexy booths line the walls as you enter this gorgeous establishment started by none other than Sasha Petraske, founder of Milk & Honey. We look forward to a proper visit.

3. Junior Merino recently touted the 100% blue-agave properties of Don Roberto tequila at a tasting he and the Don Roberto people sponsored at Rayuela, one of our favorite restaurants on the Lower East Side. Paul went solo this time and as he walked up the stairs at Rayuela, past the tree that oversees all in the restaurant, Heidi Merino gave him a kiss on the cheek and handed him a Guadalajara Silver, a slightly sweet blend of lime, green apple, and grapefruit juices, shaken with some Don Roberto Plata, a little ginger liqueur and some agave nectar thrown in. Shake it up and off you go. This was such a refreshing bridge drink, easing us from summer into fall, and everyone lapped them up. 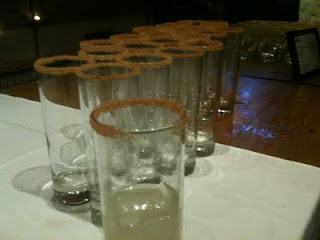 Junior then had us seated as he presented to us the three styles of Don Roberto: Plata (or silver or white), Reposado (means rested, aged for several months), and Añejo (aged over a year). [Paul’s now slipping into the first person.] I would have to say my favorite was the Añejo—it had a musky, fresh-wood smell, almost like sawdust (but in a good, piny way), and the sip was smooth, yet deep and full of caramel-woodsy age. The distinction that Don Roberto possesses has to do with terroir: the agave plants grow at the base of a volcano, so the plants take in some of the flavor nuances of the soil. You definitely get that in this tequila, especially in the Plata, but nuttier in the Reposado.

A lot of familiar faces were present, everyone merry with an endless supply of sips and nibbles, aglow with the ruddiness of Mexican spirits running through their veins. I look forward to sharing some Don Roberto Añejo con Esteban.

Method
Rim glass with sugar and cinnamon and add ice. Pour all the ingredients into a shaker, shake for fifteen seconds, and pour into rocks-filled glass.

All in all, October has proven itself to be a mighty fine month. Yes indeed. [sip.]

Posted by Cocktail Buzz at 9:34 AM