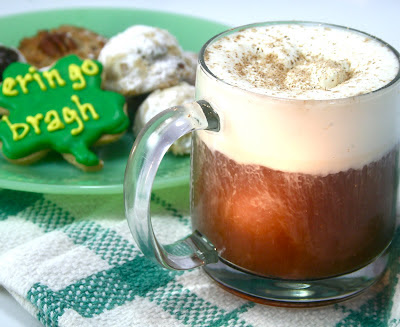 Celebrating St. Patrick’s Day doesn’t always have to begin at the crack of dawn. An Irish Coffee may be the perfect way to end a meal with family and friends.

The Tale of Rosie and Her Dad’s Irish Coffee

It’s not often we imbibe postprandial drinks — we usually limit ourselves to one when we’re cocktailing it at home, so that always means pre-dinner — but last night was special because our neighbor, the fabulously talented Burlesque performer Rosie 151, stopped by our test kitchen to help us whip up some Irish Coffees just in time for St. Patrick’s Day. Rosie shared with us her Dad’s family recipe, and lovingly limned each step as Paul went through the motions of replicating Dad’s most revered concoction.

A side note about Irish Coffee: It was most likely invented in the 40’s by one Joe Sheridan, a chef in County Limerick who added some Irish whiskey to a group of Americans’ coffees when their flight was delayed. Not a bad way to spend those hours. We suppose that after years of perfection of this caffeinated potable, Irish Coffee eventually had to make its way stateside by someone who loved it so. This happened to be Stanton Delaplane, a travel writer who worked for the San Francisco Chronicle. On a fall evening in 1952, he brought his remembrance of the recipe to the men at the Buena Vista Cafe, and after hours of trial and tribulation, and falling all over each other in sheer energized inebriation, the Irish Coffee became an American staple.

By nature it’s a contradictory drink: On the one hand, sipping the rich dark coffee is like being injected with a shot of adrenalin; on the other hand, the spiky presence of Irish whiskey makes you feel like you’re being laced with a potent soporific. But that’s what’s so fun about this drink. You get a nice boost of energy before being tamed into submission by the distilled effects of Irish liquor. Sometimes after a hard day’s work, it’s nice to straddle between the worlds of Morpheus and Mercury.

So as Paul dutifully boiled water, whipped cream, and poured spirits, and Rosie cooed instructions, both their beaus arrived for some lusty mugsful accompanied by some light cookies. As the last dollops of cream started to reveal milky legs dripping down the coffee-whiskey mixture, we couldn’t help but raise a toast to Rosie’s dad, offering a most-deserved “thank you.” Artistry must run through the family.

Method
Make sure you adjust the recipe according to the number of Irish coffees you’re making. Boil a kettle full of water (make sure you have at least 15 ounces for every Irish coffee you are making). Fill tempered-glass mugs. With the remaining water, brew your favorite unflavored coffee, such as French Roast.

Meanwhile, make whipped cream: Fill a large mixing bowl with an entire pint of cream, plus 2 tablespoons of superfine sugar. Whip until the cream is gloppy, not stiff. To test, a spoonful of whipped cream will gently plop off when tipped (not remain stuck to the spoon).

Empty the mugs and add remaining teaspoon of sugar, followed by Irish whiskey, then coffee. Stir. Top with an inch-thick layer of whipped cream. Garnish with nutmeg, to taste.

Variations
If you’re more of a traditionalist, you can substitute brown sugar for the superfine sugar added to the mug. Or, instead of adding the sugar altogether, add a half ounce of Irish Mist.

And speaking of Irish Mist, that honey-and-heather laced whiskey liqueur from Dublin, we offer you another after-dinner libation. A variation on the classic Rusty Nail (which unites scotch whisky and Drambuie), the Irish Nail flaunts Irish whiskey’s natural attraction to Irish Mist, creating a smooth, honey-sweet drink that is the perfect nightcap. It’s also a further variation on a Black Nail, which uses equal parts Irish Mist and Irish whiskey, plus an orange peel for a little flavor. You may want to have an Irish Nail after a round of Dad’s Irish Coffees. Don’t forget to nibble on some shortbread while you do. They go so well together. Slàinte. (That’s Irish-Gaelic for “Cheers.”) 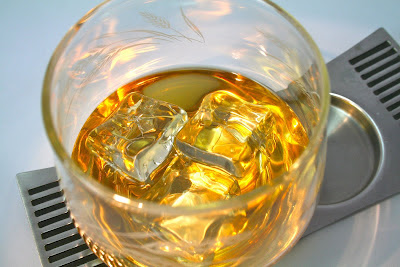 Use all your senses as you bring the golden glow of an Irish Nail to your lips.

Irish Nail
(adapted by Cocktail Buzz, based on a Black Nail)

Ingredients
1 1/2 ounces Irish whiskey
1/2 ounce Irish Mist (use less depending on how sweet you like your drink)
3 ice cubes
orange peel, as garnish (optional)