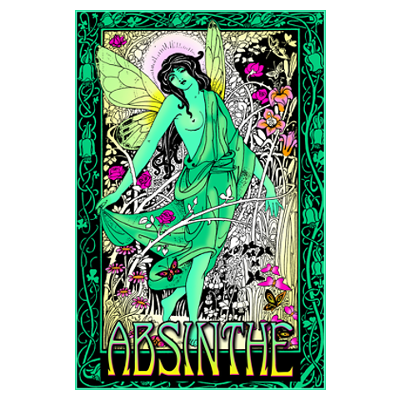 The Green Fairy gambols through the butterfly forest in this vintage absinthe poster.

March 5 is National Absinthe Day. You have twenty-four hours in which to worship at the altar of The Green Fairy, as it has been commonly referred to in literature because of its hue and high alcohol content (you’d see fairies too if you drank enough).

Absinthe can be a conundrum for the uninitiated. “It’s so strong and licorice tasting, how can I possibly like it?” Absinthe derives its strong, somewhat medicinal flavor from all the botanicals and seeds stirred into the distillate, such as anise, fennel, and the controversial wormwood. Wormwood (Artemesia absinthium) is a bitter, menthol-tasting plant that secretes oil containing thujone, a regulated compound and the source of the controversy. In the past, people believed that thujone in high quantities could induce hallucinations; however, the actual amount of thujone present in absinthe is so small as to induce nothing more than eye-rolling from inveterate absinthe drinkers who know that it’s the high alcohol contact that’s more apt to induce visions of the la fée verte. So if you sip some absinthe straight from the bottle, you’ll notice immediately the bitter woodsy floweriness of the wormwood that gives absinthe its unique vegetal flavor. It should not taste anything like mouthwash. If it does, you’ve got yourself a bottle of crap. You should also know that not all absinthe is green. Take for instance Lucid. Its pale straw color is barely perceptible in the dim light of a smoky bar, but its taste is unmistakably “absinthean.”


“Let me be mad . . .
mad with the madness
of Absinthe, the wildest, most
luxurious madness in the world.”

The most traditional way to take your absinthe is with sugar and cold water in a process called louching. Ice water from an urn is slowly allowed to drip through a controllable spigot onto a sugar-cube held by a fancy-looking miniature spade with holes. This is an absinthe spoon and it is positioned over a glass containing your favorite absinthe. When the water drips and slowly dissolves the sugar cube, the absinthe will become milky and diluted by the cold water and the sugar, turning it into a highly enjoyable sipper. 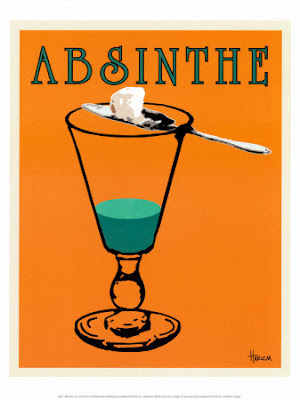 The louche (pronounced loosh), or the milky green opalescence, is the center of Lee Harlem’s absinthe poster.

Absinthe also mixes well with many spirits, and a bottle can last you a seeming eternity since many recipes only call for a dash or two of this liquor. We’ve shared absinthe cocktails with you in the past, some with just a touch, to add a bright anise flavor, others with a heavy dose that pack a wallop. Regardless of how you like to imbibe the Green Fairy, here are collected posts containing absinthe. You can search for the word absinthe once you click the link to find the recipes. Absinthe cocktails and more. Also note that you can substitute absinthe for Herbsaint and Pastis in these recipes. Bottoms up!

Email ThisBlogThis!Share to TwitterShare to FacebookShare to Pinterest
Labels: absinthe