One of the events we look forward to every year at Tales of the Cocktail is the Spirited Dinner® Series, and our choice this year promises to be a gentle and humorous battle between several bartenders from the Left Coast (which comprises Vancouver all the way down to San Diego) and the East Coast (from Boston to Miami). The venue, GW Fins seafood restaurant. Our host, Ted Munat, co-author of Left Coast Libations, a cocktail book extolling the virtues of the other coasts’ top bartenders. Ted promises to “guide us through a comedic journey into the East/West ‘Rivalry’ of the cocktail nation, featuring 10 star bartenders from both coasts in round by round battles for supremacy.” Supremacy and battle might sound a bit heavy-handed for an event in which the bartenders all seem to get along, no matter from which coast they find themselves behind the stick. But hyperbole, mixed with alcohol paired with tasty cuisine prepared expressly for the event by Chef Mike Nelson, sounds like the perfect recipe for an evening charged with bold flavors, and a variety of shaken and stirred styles. According to the press release, “Theatricality will of course be immense. Laughs, tears, and intense realizations are guaranteed.” Bring it on!

Says Debbie Rosen, publicist for the GW Fins Spirited Dinner, “Michael Nelson has been GW Fins’ Chef de Cuisine for several years, and as such he has been developing the Tales of the Cocktail Spirited Dinner Menus for the past four years.”

She continued, “With Tales of the Cocktail, the event directors request GW Fins’ Spirited Dinner menus the November prior to the event, so the chefs really have to think about what will definitely be at its prime in July without much wiggle room. They also have to put themselves in the mindset of light, summer dishes in the thick of the winter.”

With that in mind, Chef Nelson created his menu first, before the cocktails, with the goal that these dishes would be easy to pair with the bartenders’ creations. Over the years, working with bartenders on these Spirited Dinners, he noticed that they “either create a drink that is lighter and has fruit flavors, or a simple, stiff cocktail.” Chef Nelson believes that “each of the dishes on has a sweet and sour aspect to them that works very well with either of these types of cocktails.” 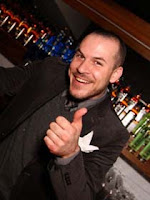 Competing against West Coast (Portland) bartender David Shenaut, NYC Bartender Jason Littrell, the newest member of the Death & Co. team (one of our favorite watering holes in the world), has developed a cocktail he calls Behind God’s Back (not a reference to being naughty). This drink, using Chairman’s Reserve Rum as the base (both bartenders used this spirit) will be paired with Chef Nelson’s First Course dish, a Spicy Vietnamese Glazed Pork Belly. When asked if he has a secret weapon to defeat his challenger (Jason and Dave are actually good friends and are working closely together for the Portland Cocktail Festival in October), Jason remarked, “I’m always thinking of new ways to clown on Dave Shenaut. You’ll just have to see how this one pans out.”

In coming up with the idea for the drink, Jason found inspiration from Cachaça Dave (tastemaker Dave Catania), who shared a phrase with him one day when he was working behind the bar at Dram. “Behind God’s Back” is bandied about a lot in St. Lucia, where Chairman’s Reserve Rum is born, and refers to “something that was very far away . . . on the other side of the island.” After a little tinkering, this tiki-influenced cocktail was born. Chef Nelson is hoping that the flavors of the cocktails mingle wit the “tartness of grapefruit, acidity of tomatoes, and sweetness and spicy aspects of the Vietnamese Glaze on the Pork Belly.” We can’t wait to taste the results. 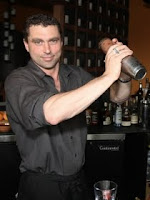 Shaking and stirring behind the bar at Seattle’s Liberty Bar, of which he is a co-owner, Keith Waldbauer is poised to pair the Fourth Course, a Warm Roasted Pineapple with Coconut Sorbet, with his potion he dubs the Oaxacan Flip.

Finding inspiration from East-Coast bartender Eben Freeman who once concocted a brown butter–infused rum, Keith created a brown butter–infused Fidencio Mezcal. “I thought that would work well with the type of mezcal I am working with. After doing that, I figured a flip would be in order.” A flip uses a whole egg, and along with that, Keith added Benedictine, lemon juice, Bitterman’s Mole Bitters, and, to match flavor in the dessert, some grilled pineapple Gomme syrup. Keith is competing against Don Lee, who promises the ethereal “cocktail spray into the air.” Does Keith have something up his sleeve to bring down Don Lee? “I’m there to have fun with everyone and just to work with these talented guys. So maybe my devil may care attitude is my secret weapon.” These two “cocktails” could not be any more disparate, and we eagerly await this “battle.”

But is there much difference between East Coast–West Coast style? According to Keith Waldbauer, “When I think of the differences between West Coast and East Coast, I think that the West Coast is more known for ‘market-style’ cocktails (lots of fresh ingredients) while the East Coast style is more ‘spirit-forward,’ though I also believe Seattle is kind of an island unto itself amongst West Coast cities and is more East Coast style.”

Jason Littrell concurs with Keith’s assessment. “I would postulate that there are a lot more herbs and spices going on on the West Coast (LA, SF, Portland), while the East Coast (New York) leans more towards emphasizing spirits and using infusions.” He sums it all up simply by saying, “I don't know, I just like to drink.”

And drink we will, as these top bartenders duke it out wearing wide grins and kid gloves this coming Thursday at GW Fins.

To read more about the GW Fins’ Left Coast vs. East Coast Libations Spirited Dinner, and find out what Dave Shenaut really thinks about the competition, check out Francine Cohen’s piece on Inside F&B.

The GW Fins Dinner is sold out, but you can probably add yourself to the waiting list by calling 504-581-3467.