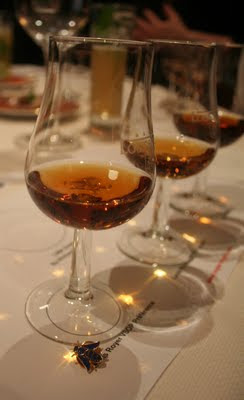 A bee, symbolizing the natural world, is the perfect logo for Louis Royer Cognac. For M Royer, it was a symbol of “diligence, an efficient and lively organization, and regional and craftsman work.” We like bees as well.

Last week we were invited to a Cognac tasting at New York City’s Daniel, the Michelin three-star restaurant led by the esteemed chef Daniel Boulud. Master Selector Jérôme Royer and Master Blender Laurent Robin from the award-winning Louis Royer Cognac distillers flew in from Jarnac, France, to regale 75 of us with the history of the Louis Royer company. They also offered us tastings of three Louis Royer cognac expressions, including its latest, “Force 53º,” a high-proof cognac developed especially for the American market, and a total of nine different Force 53º cocktails, created by local bar chefs.

It was our first time at Daniel, and the mood was decidedly festive. Four different cocktail stations were set up in the front dining rooms as mixologists whipped up their creations and waiters passed by with tiny bites of fish and other tasty hors d’oeuvres. Barman Jason Littrell, who was standing in for an absent mixologist Jonathan Pogash (he was busy becoming a new dad—congrats, Jonathan!), offered us each a Commes les Français, a champagne and Force 53º cocktail, mixed with a little Combier Liqueur d’Orange, Lillet blanc, and passion fruit juice, and a rinse of pastis. A lot of ingredients? Yes. But bewitching, indeed. It was the perfect way to start the evening. After about a half hour of sipping and chit-chat (Paul met the lovely Eleanor West from Food Republic, the brainchild Web site from chef Marcus Samuelsson, that caters to men’s taste), we were ushered into the private dining room where we parked ourselves at a table with some of the most delightful ladies on the planet: Jen Pelka, managing Editor of Gilt Taste, and Whitney Chen, also of Gilt Taste, and a current Food Network Food Star finalist. 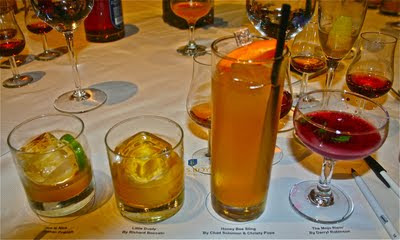 Four of the nine or so “Force 53” cocktails. This photo reminds us of an old-school paper cocktail menu. Bottoms up!

A collective insobriety hung over the event once we were seated and the gentlemen from Louis Royer began their chats. Jérôme Royer, a fifth-generation distiller, charmed us as he gushed about the family business. “My blood is cognac,” he added before guiding us through tasting his VSOP Preférence and XO expressions, along with the Force 53º. All were incredibly smooth (water had been added to each to open them up), and elicited aahs throughout the room. We could tell right away that the Force 53º would be an excellent base for cocktail creations, and the bar chefs on hand crafted some beautifully redolent and tasty concoctions. Hands down our favorite offering by Jonathan Pogash was his Spice Is Nice, a rocks drink made with Force 53º, Cinnamon Syrup (courtesy of Trader Tiki), some ginger syrup, and some lime juice. What made the drink so special was not its first few sips (which had us hooked), but the garnish: a lime wheel dusted with cayenne that lay perched above the drink. When tipped, the cayenne added a new layer that was surprisingly tasty, without being too spicy. 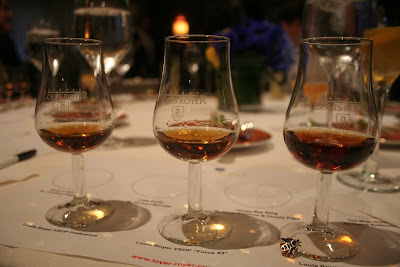 As sipping continued, we discovered that Whitney used to be a total science geek (a lot of chefs have admitted to being science geeks—cooking has a definite geek factor that appeals to us); and also that Jen used to be a chef at Daniel. After more getting to know each other and four new cocktails to try, she offered us a dip into the kitchen. We quickly followed her into the heart of Daniel. To behold the hive-like activity that awaited us behind the doors was exciting and entertaining. If you would indulge us with an oxymoron here, a bustling calm canopied the chefs as their hands and tools worked in harmony to make click-clacks on the wood and stainless, and the penetrating gaze of their eyes focused on the final touches of the courses they prepared. The celadon glow of the tiles that line the walls perhaps added to this mood.

Thanks to Hanna Lee from Hanna Lee Communications for the invitation. She brought together formidable talent from all over the world to a magical place in the heart of the great City of New York.

Method
Add ingredients to mixing glass with ice and gently fold. Strain into chilled champagne flute that has been rinsed with pastis, and top off with extra champagne. Add lemon peel garnish. 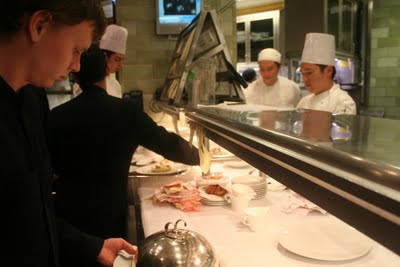 Waiters and Chefs, at Daniel, NYC. 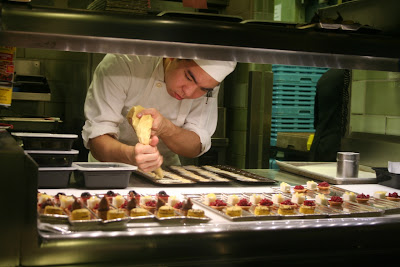 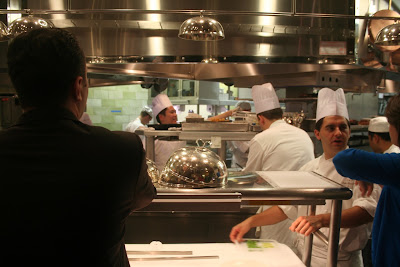 The Kitchen at Daniel, NYC.