A seasonal miniseries showing you how to use farm-fresh ingredients in your cocktails. 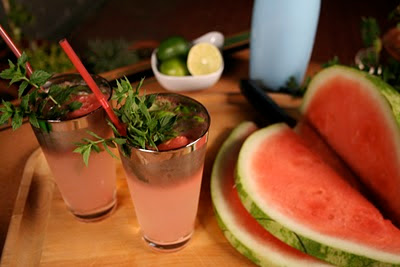 Steve shares his love for using seasonal ingredients in his signature cocktail.

I just love watermelon at its peak during the summer, when one bite into a slice sends pink juice dripping down your chin. When its sweetness reminds you instantly how much you loved it last summer. I definitely wanted to make a cocktail with watermelon, but in a way I had never heard of before. My inspiration came from an old Imbibe Magazine recipe for Watermelon–Sake Popsicles. What overgrown child doesn’t love an ice-cold popsicle on a hot summer’s day, and if it’s watermelon, even better. And with sake? Well hip, hip hoorah.

I think we all get crazy for watermelon in the summertime because of the uniqueness of its sweetness. Sure, its texture is unmatched by any other fruit I can think of, the slightly rough structure that collapses with just a little pressure, shooting forth a big burst of honeysweet goodness. So I decided to make ice cubes inspired by the popsicles, plop some of those into a tall glass, and tickle the cubes with the herbaceous tastes of basil and spearmint, and anoint with a generous portion of Hendrick’s gin, graced by lovely cucumber and rose notes. With each sip, the watermelon–sake ice cubes slowly melt, and with each consecutive sip, you are taken on a journey from tart booziness to slushy sweetness. I know that to make these drinks requires a little effort beyond regular mixing skills, but do believe me when I say they will delight all the guests at your cocktail party. Make sure you have plenty of everything so that each person gets at least two drinks, three for the heavy hitters.

Paul and I love to pair our Gin Stevies with another summertime favorite—heirloom tomatoes. We dice them and dollop generous portions on freshly toasted baguette to create the perfect bruschetta. Take a bite, and follow with a generous sip of this tall summer cooler bursting with flavor.

{ For the recipe and to watch our video pairing the Gin Stevie with Bruschetta, click here. }

The Story Behind the Bruschetta and Those Delicious Heirloom Tomatoes

Every summer we drive up to the North Shore of Boston, to a lazy little little town called Pride’s Crossing, to visit our friends Jim and Lou, and their Dalmatians. Paul was friends with Jim about twenty years ago. They lost touch with each other, as most peripatetic souls do, but were reunited several years back while having dinner in a Boston restaurant. We read about Orinoco and its Venezuelan-inspired menu in a local dining guide and thought we’d give it a try. The restaurant, in a gentrifying part of town, seemed magical. The wait staff enchanted us with mouth-watering descriptions of seasonal fare. At dinner, Paul was telling Steve all about his long-lost friend, Jim, and how for a few years they shared laughs and tales of growing up closeted in their respective New England towns, and while the tale of Jim was being told, there was Jim, with a friend, dining in the same restaurant. After much hugging, and wide-eyed disbelief at the serendipity of coincidence, Jim invited us up to his home. “You’d be crazy not to come.” So of course, we canceled the balance of our hotel reservation and headed up to Pride’s Crossing, but not until the owner of the restaurant, after witnessing this miracle reunion, invited us over to his table for desserts as he regaled us with tales of growing up a foodie in Venezuela.


Heirloom tomatoes can add an unexpected flavors to your summer cocktail party.

We decided to sleep off the effects of the dinner and met up with Jim the next day. As we followed behind him on Route 127 to his home, we turned up a private lane, and following a forest-lined narrow road, entered the gates to the property. The theme from “Dynasty” filled our mind’s ears as we gazed with jaws agape at the enormity of the house and the grounds filled with gorgeous flowers at every turn. Their estate is dubbed “Sunset Rock” and the house sits right next to a bluff overlooking Salem Sound and all the cays that dot the ocean. Lou and Jim are both inveterate gardeners, Jim focusing on the floral landscaping, Lou, the edible. Lou’s obsession with heirloom tomatoes is a blessing to his all his guests. If we visit late enough in the season, we always end up with arms full of these ripe juicy beauties. One summer, after making our friend Evangeline’s tomato tart (it was featured in the August 31, 2003, New York Times, so you know it has to be good!) with Lou’s tomatoes, we still had a bunch left. So we diced them all, bought a loaf of bread, and presto, instant bruschetta. Bruschetta (pronounced broo-SKEH-tuh) is a classic Italian appetizer made with six simple ingredients: bread, tomatoes, salt, pepper, garlic, and olive oil. In our version, we’ve added the slightly hot and bright zing of red jalapeños . . . it brings out the sweetness in the Gin Stevie and other drinks. Heirloom tomatoes in all their variety add a saturation of color and act as a perfect foil to the watermelon, basil, and mint. Be forewarned: the appetizer course may last a while—your guests won’t be able to get enough of this dazzling duo.