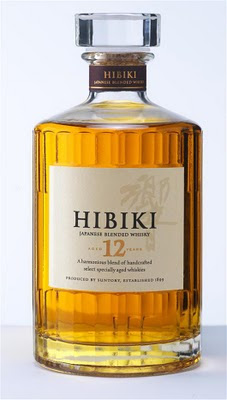 The other day I attended an intimate whisky tasting in one of the private rooms at the relatively new Midtown restaurant Aureole. Tanya Thomas of Truth Be Told introduced Seiichi Koshimizu, master blender for Suntory’s Hibiki 12-year blended whisky, and after a gentle and informative PowerPoint lecture (translated by the lovely Akiko Katayama), the wait staff at Aureole surprised us with a four-course meal. I say surprised because Tanya promised us “light fare.” If light fare is Foie Gras Torchon, Walnut-Crusted Soft Shell Crab, Mangalitast Pork Strip Loin, and a Dark Chocolate Torte, then I say so be it (and please keep the invitations coming).

Aureole’s chef designed the dishes specifically for pairing with this smooth and nuanced Japanese blended whisky. The plating of the Foie Gras was artistic to say the very least: a swath of English Peas, as if the artist used a paint spatula to spread the bright green puree across the plate, creating a boundary between the cherry compote and the foie gras, which was kissed with some anise hyssop leaves. Also on the same plate were little cubes of almond paste dusted with what looked like pepper, but it could have been grains of paradise or some other dark ground spice (I should have asked). Separately, all the elements were chock full of flavor, but mixed together, and spread atop a little Chilie Chocolate Croissant, the dish sang when sipped with a bit of the Hibiki.

Similar to Scotch whisky, the Hibiki, when diluted with a little water, gives off an aroma akin to waffles and maple syrup, which made me instantly like it. Master Blender Koshimizu informed us that, to him the nose of the whisky reminded him of fruit, particularly plums, raspberries, pineapples, and honey. The sweetness definitely lasted through the long finish, and “truth be told,” I kept asking for more as the meal progressed. The secret to the flavor lies in the wood used to make the aging barrels, Mizunara, or water oak, which creates a softer, smoother spirit. We were also treated to the 21-year Hibiki, which easily provided us a nonstop sipping orgy. Slightly fruitier and smoother, this potable would go well with chocolate, but might be good for just sipping on its own, whereas the 12-year, when diluted pairs better with rich, well-seasoned fare.


The Hibiki is expensive (over $60 a bottle), but if you are a Scotch or Irish whiskey enthusiast who enjoys seeking out new whiskies, by all means seek this one out. It’s a sipper and will sure to last you through several seasons of pure enjoyment. And also check out Aureole located adjacent to Times Square where the chefs create gorgeous dishes that challenge perceptions, yet somehow manage to find balance, flavor, and progression.