Chasing Away Those Monday Blahs 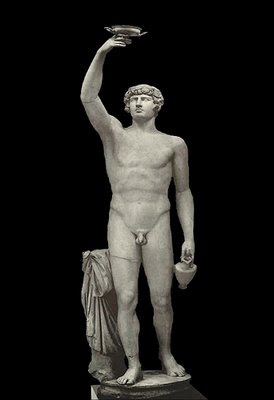 For those who work 9 to 5 jobs, the anticipation of Monday can instill dread. The alarm clock sounding like a Klaxon, warning you that in a matter of hours (or minutes for those of you who jump out of bed, brush, and dash) you will be behind a desk looking in horror at an Excel chart, wondering “Where the heck did my weekend go?” That’s why Monday should be a day of celebration, and what better way to celebrate the day named after the moon than to sing a hymn to the gods of libations. Normally, by Monday evening, we would offer praise to Dionysus by tipping one or two back, but before we could relax with a drink in our hands, we would have to conjure the spirit of Ganymede, the Cupbearer to Zeus and his ilk (see pic, above), and hightail it around this city to meet some new people, and share the joys of cocktails. So where did we hightail it to? The World Bar to meet Count Niccolò Branca and listen to him share a few words on his bone-dry bitter, yet strangely bewitching, Fernet Branca; the Boathouse at Central Park to deliver the final ingredient for the new cocktail we created for a benefit for CANY (Creative Alternatives of New York); and the Combier Liqueur d’Orange mixed with Siembra Azul tequila cocktail party at Light Space.

Our journey actually began on Sunday night: we drank several toasts to bar chef Tad Carducci who’ll be competing in the Leblon Cachaça Presents the USBG Caipirinha Competition down in New Orleans this July for Tales of the Cocktail. (Tad won last year in the Bloody Mary Competition.) Francine Cohen, editor-in-chief of Food & Beverage magazine, threw a party for Tad, and what better way to cheer him on than three new cachaça cocktails created by the estimable Jason Littrell, of the Randolph. One of our favorites was Leblon'd, a sexy libation that leaves its mark with the sweet summer taste of watermelon, and the hot, lip-smacking sting of jalapeño. Ay, what a way to get the party started.

Method
Shake in ice for 15 seconds and strain into Collins glass filled with crushed ice. Top with soda. Add watermelon peel, as garnish.


Steve and Paul welcome Count Branca and his amazing spirits.

So after a decent night’s sleep broken only by the anticipation of a full day of cocktails and mingling, we ate a full breakfast, hopped in the Saturn, and wended our way into Manhattan, specifically the World Bar, across the way from the UN. Laura Baddish of The Baddish Group invited us to a delightful luncheon in honor of Count Niccolò Branca, the CEO and Chairman of Branca International S.p.A. If you are thinking Fernet Branca, and by association Carpano Antica vermouth, you are correct. The charming Count entertained his captive audience by proudly stating that Branca was the first fernet (his, a bitter digestif made from a grain-distilled-spirit base). “All the rest followed.” He credited the fernet’s success to “product integrity,” and when LeNell Smothers, bourbon lecturer and fellow Brooklyn resident, asked the Count to define fernet, after a heated discussion among many members of the crowd, he decided “it is brown and bitter.” No one could quibble with that pronouncement; however, neither could anyone come up with a concrete answer. “Perhaps there is no definition,” sighed LeNell. Then we all offered a toast to the Count.

One of the cocktails offered at the event inspired Steve to create one for the Monteleone Cocktail contest. You can check out the recipe by clicking here.

After the luncheon, we left the bar and had to put up our umbrellas. The rain would threaten the outdoor portion of our next event, Broadway at the Boathouse, a spring bash to benefit Creative Alternatives of New York. Gondola rides were to be offered, so the cocktail we came up with, with its Venetian flavors of herbs, hazelnuts, and lemons, naturally would be called “The Gondolier.” As we approached the Boathouse, the rain started coming down in bushels and pecks. We ran for cover and entered the main ballroom, where an elaborate array of food lined the walls, as servers prepared their stations. Our friend, the talented and Tony-winning actress, Cady Huffman (see photo, above, with Dare screenwriter David Brind), who asked us to create a cocktail for the benefit, looked ravishing in red, and she ushered us into the room. We both felt that last-minute yet controlled chaos that injects energy into every party. The head bartender found us, so he introduced us to the men and women who would be making The Gondolier. After a quick mix and a few sips, we were ready to relax and have a good time. (Ah, Selina, you make a great Gondolier.) The cater-waiters brought out the hors d’oeuvres with the alacrity of a band of cheerleaders and the frequency of a morning rush-hour R train. The turkey and beef tenderloin . . . roasted to perfection. After spotting such celebs as Bill Pullman, Jerry Stiller, Anita Gillette, Neil Simon and wife Elaine Joyce, we sadly said our good-byes before the entertainment portion of the evening, for we were off to another bibulous party. One that lifted our spirits even higher, and made for a great nightcap: the Combier and Siembra Azul tequila party at Light Space. 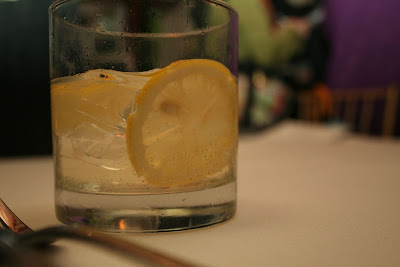 The Gondolier
(created by Cocktail Buzz)

Method
In an ice-filled rocks glass, add the first four ingredients and stir. Top with about an ounce of soda, add a squeeze lemon and add wedge to drink.

*Available from Blair Reynolds, www.tradertiki.com, or substitute another falernum or tiki-style bitters. 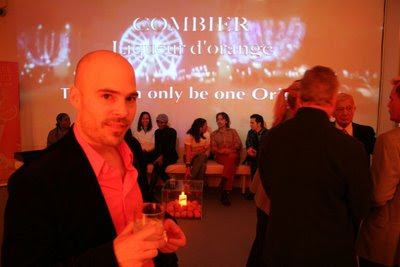 As we approached Light Space on West 36th, we were overcome by glowing orange and technocalm emanating from the storefront windows. As we strode in, we witnessed the source of both light and music: moving projections of the Eiffel Tower and copper stills danced along the walls, while a big bottle of illuminated Combier Liqueur d'Orange held sway on the wall by the door. Eager cocktail lovers grabbed for Combier–tequila drinks from cater-waiters happy to empty their trays. We spotted our friends Scott Goldman (President and Director of Sales of Cadre Noir Imports, importers of Combier) and his brother Curt (CEO) (we met them at Tales of the Cocktail last year), both spreading the love of this triple sec nonpareil. They took us directly to the bar to try some cocktails marrying the flavor of Combier with the spiky spiciness of tequila. (A marriage made in heaven, it should be noted.) 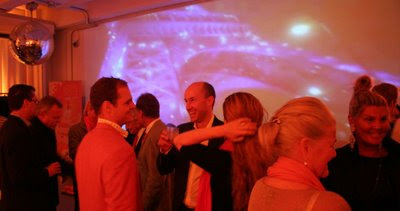 We chatted with these dashing former Pennsylvanians along with Scott’s lovely wife Meredith, and then were introduced to Franck Choisne, Combier’s Owner and Master Distiller. Listening to him wax poetically about the Combier distillery made us pine for a trip to France. Paul has yet to touch his toes on French soil, so maybe one day we’ll be able to visit the home of our favorite triple sec together.


Steve, Meredith, and Curt smile for the camera in the Combier orange glow.

By the time we had our second drinks, it was getting late. We hopped on the Q train (we dropped off our car earlier) and headed home, content with the whimsical notion that Ganymede would be smiling down upon us from Mount Olympus. 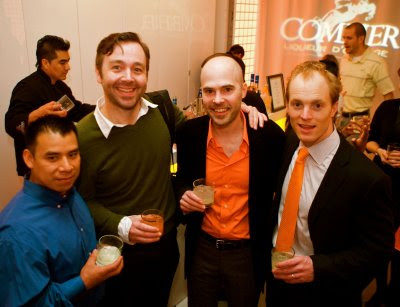