Moonshine Madness at Tales of the Cocktail 2009

Piedmont Distillers, the producer of the hand-crafted Catdaddy and Junior Johnson’s Midnight Moon Carolina Moonshines, has paired up with Dickie Brennan’s world-famous Bourbon House to bring you a spirited lunch. Yes, a spirited lunch at which you can celebrate all your happinesses (or drown all your sorrows) in a beguiling batch of ’shine cocktails while chomping on some delectable Southern cuisine.

Joe Michalek, Founder of Piedmont Distillers, provides the raison d’etre for the marriage: “Catdaddy and Junior Johnson’s Midnight Moon both have a rich history founded in America’s moonshine past. But, they are also two high-quality, ultra-smooth spirits. Hosting a Spirited Lunch at Tales seemed like a great way to share our story and give people a chance to experience how far moonshine has come in the last several years.”

Last year at Tales, we stumbled into the Piedmont Distiller’s Tasting Room, and tried some Midnight Moon kissed with a drop of water (it is indeed smooth, and as we later discovered, perfect for infusing your favorite fruits, herbs, and spices), followed by a chaser of Catdaddy peach tea. Instantly drawn to the uniqueness of the Catdaddy (it tastes like no other flavored spirit, some likening it to cake frosting, bubble gum, and custard), we were eager to make some cocktails with it. That’s where Sarah Leroy, Piedmont Distiller’s Director of Marketing, comes into the picture, providing serendipity. 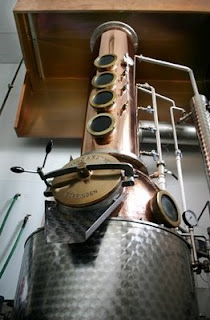 Sarah invited us to create three cocktails for the Bourbon House luncheon that’s focusing on Southern food traditions, such as three of our favorites: catfish, pork, and cornbread. Add to the mix the two moonshines, and you’ll find yourself fêted with a panoply of reimagined southern trimmings in what Piedmont Distillers and Bourbon House are calling “From Down-Home to Downtown: A Lunch Celebrating the Evolution of Southern Traditions.” Says Sarah, “We’re so excited to partner with Bourbon House. Chef Darin and the rest of the Bourbon House team have done an amazing job bringing to life the ‘down-home to downtown’ theme. The menu Chef Darin has created reinterprets southern food mainstays and compliments the flavors of Catdaddy and Midnight. I believe the menu will even include a few sauces and marinades made from Catdaddy and Midnight. I think we’re all in for a real treat and I expect the lunch to be a fun afternoon filled with delicious food and tasty cocktails.” 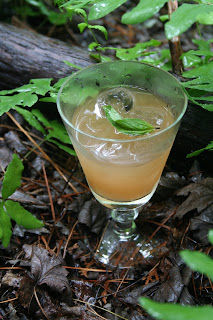 [The Adam Cocktail, to be served with corn-crusted catfish at the Bourbon House–Piedmont Distillers luncheon.]

And what a menu: The first course, corn-crusted riverside catfish fried and served with lima bean succotash and Catdaddy tartar, will be paired with a tempting variation of the bloody mary we call Adam, made with seasoned tomato water and Midnight Moon. The second course, a pork confit hash (cane syrup and Junior Johnson’s Moonshine–glazed pork confit, served over hash with smoked hominy), will find itself paired with a sweet-and sour-cocktail made with Catdaddy and bourbon dubbed the Kitty Carlisle (named, of course, after the famed New Orleans native). And if that isn’t enough, for dessert Chef will prepare a molasses and cornmeal custard with Creole cream cheese ice cream. We’re pairing this mouthful of love with The Maltese, a concoction of Catdaddy and creamy molasses. 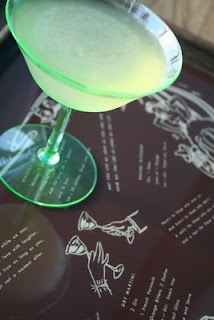 [The Kitty Carlisle Cocktail, to be served with moonshine-glazed pork confit.]

Says Chef Darin, “Our menu was inspired by the roots of the moonshine business—corn and rural Southern food laid the foundation. We’re incorporating foods that are associated with Appalachian cooking, and applying our own New Orleans twist . . . using the confit technique on pork, incorporating Louisiana cane syrup and creating a Creole cream cheese ice cream for the molasses and cornmeal custard. The flavor profiles of these dishes will be enhanced by Paul and Steve’s moonshine cocktails.”

When presented with Chef Darin’s menu, we had two goals in mind. The first was obvious: the drinks had to pair well with the food. Our second goal, however, allowed us to be poetical: we wanted each cocktail to be a part of a progression of flavor sensations. So we’ll start with savory, move on to sweet and sour, and culminate with bittersweet. 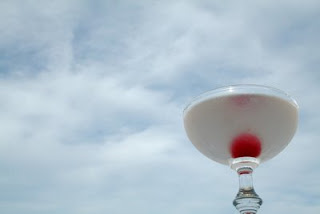 [The Kitty Hawk Cocktail, to be served at Piedmont Distillers Tasting Room.]

And if you don’t make it to the luncheon, but want to try some old-school alchemy applied to these new-world ’shines, then stop by the Tasting Room on Friday and we’ll craft you some icy cold cocktails. You’ll have four new libations to sample, some inspired by such classics as the Aviation (with crème de violette), Moscow Mule, and the Sidecar, and one that celebrates National Blueberry Month. Blueberries are at their peak in July, so we honor that by giving you a drink that’ll honor these lovely berries bursting with their sweet, tart juice. We may even throw in another for good measure. 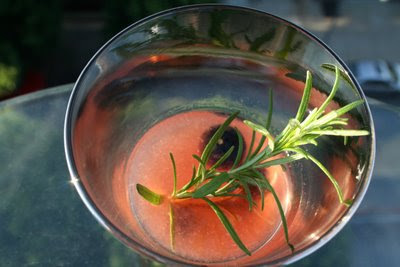 [The Blue Moon Cocktail, to be served at Piedmont Distillers Tasting Room.]

Spirited Luncheon: From Down-Home to Downtown: A Lunch Celebrating the Evolution of Southern Traditions will take place at Bourbon House, 144 Bourbon Street, Thursday, July 9, 2009, from 12:30–2:30 PM. Tickets are available here.

Posted by Cocktail Buzz at 8:35 AM