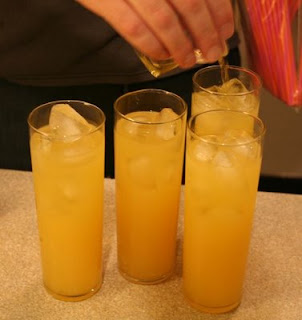 Ah, the guilty pleasure. For some it involves French Fries and a Big Mac, purchased at a rest stop after long-distance stomach grumbling. We try justifying our purchase by telling ourselves, “Well it’s either a Big Mac or some pizza that looks like it’s been sitting under that orange light for eight hours, at least the Big Mac is fresher.” For others, only the guilty pleasure of a pint of Häagen-Dazs Rocky Road will do. And at over 1,000 calories, the guilt really slaps you across the face before depositing itself in your butt, thighs, and stomach. If only we could extract the guilt from these pleasures. Why are we so ashamed to let the cat out of the bag when it comes to the stuff we really like? Because people are mean. Plain & simple. “You ate a Slim Jim and washed it down with a rum and Caffeine-Free Diet Coke? What are you, some sort of culinarily challenged rube?” The one thing we don’t do here at Cocktail Buzz is judge you for what you like or dislike. Granted, if you don’t like us, you clearly have no taste. But if you do, then by golly, we like you too.

“The Harvey Wallbanger is an alcoholic drink or cocktail made with vodka, Galliano, and orange juice. This well known tipple was one of many cocktails invented by renowned and two times world champion mixologist Donato ‘Duke’ Antone. Other notable ‘Duke’ creations are the Rusty Nail, The Godfather and the Flaming Caesar. This is one of many cocktails invented by ‘Duke’ in Los Angeles during the 1950s. According to legend, Harvey was a California surfer. After losing an important contest, he consoled himself in Duke’s Blackwatch bar with one of his ‘special’ screwdriver cocktails.”

Our parents drank Harvey Wallbangers in the 1970s, and if they were good enough for them, they’re good enough for us. Who can resist the sweet and tangy goodness of fresh-squeezed orange juice. And Galliano? Just envisioning the chartreuse, tapered bottle is enough to send us into paroxysms of liqueur-lust when there are Florida oranges in the fruit bowl waiting to be deflowered. Unscrewing the cap of Galliano and smelling that vanilla-anise whiff is another step on the road to insobriety, and because the Harvey Wallbanger is a terrific brunch drink, you can feel guilty (or not) about drinking before you’ve even thought about what you’re going to make for dinner. Try having two Harvey Wallbangers . . . you’ll stop thinking about dinner altogether. We encourage having several with friends. It makes for such a fun meal. (Click here to read about our Wallbanging escapades with two delightful dining companions.) 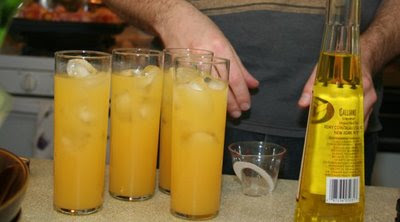 Method
Stir vodka and orange juice in an ice-filled highball glass for 5 seconds. Float Galliano on top. Add a straw if you so desire. For a twist, try fresh-squeezed tangelo juice.

Posted by Cocktail Buzz at 6:00 PM