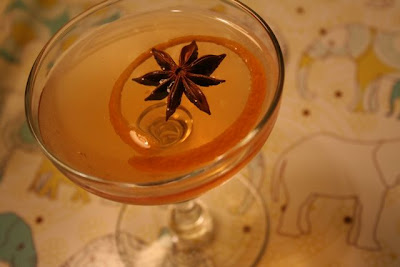 The Pushkar Sunset, a bracing mix of bourbon, ginger liqueur, and some fragrant garnishes, was created by Matthew Eubank and Alexis Soloski.

Matthew Eubank and Alexis Soloski, two fellow Brooklynites, and a terrific couple who love a cocktail now and then, won us in a raffle sponsored by the Soho Rep. a few months back. Their prize: to create a signature cocktail. And that they did. Both Matthew and Alexis are fans of whisk(e)y, so we embarked on a journey to create a cocktail that would be made up mostly of a type of whiskey, and some other spirits and such thrown in for good mixing measure.

Steve immediately suggested Old Fitzgerald’s 1849 Kentucky Bourbon, which packs a respectable punch at 90 proof. Like Maker’s Mark, Old Fitzgerald uses wheat as the secondary grain (instead of rye) to make the mash, so its flavor is quite discernibly different from a corn-and-rye bourbon such as Jim Beam. The happy couple took a sip and were delighted not only by the flavor, but by the price. If you can find it, Old Fitzgerald’s 1849 will run you about $16 for a fifth.

Bourbon’s not like gin; mixing it requires the addition of flavors that are going to stand up to the piquancy of the charred-oak barrel notes that make bourbon so tasty, but not disguise it or overpower its deep rich, sweet woodsiness. Ginger was as good as any place to start, so we added a squirt of a Domaine de Canton ginger liqueur to a shot of Fitzgerald, and continued to do so until the ginger was a big presence. 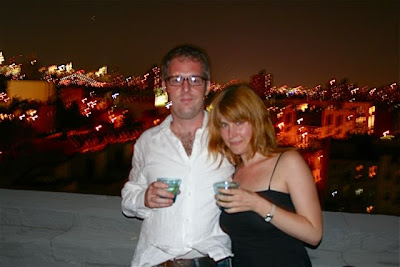 Matthew and Alexis enjoy their new creation, the Pushkar Sunset, with the Manhattan skyline in the background.

Alexis suggested adding some lemon juice to see what that would do, but the tartness of the lemon and the spiciness of the ginger weren’t doing it for us. The flavor just seemed off. So Paul suggested orange on some level, and Matthew opted for some orange bitters. We have some Bitter Truth orange bitters in our arsenal, so a few dashes of that were a perfect foil to the strength of the ginger–bourbon duet. Also, we thought we would add an orange rind using a vegetable peeler, and perform the operation above the glass so that the oils would spray gently over the glass, creating a gentle aroma. After Paul suggested adding a dash of spice, Matthew opted for nutmeg, and the deal was sealed. A cocktail had been born.

But the story does not end there. After Matthew and Alexis waxed fondly over their recent trip to India, they decided the drink should be named the “Pushkar Sunset.” The drink was spicy, like much of the cuisine throughout India, but they wanted to try the cocktail with a different garnish: star anise. Since we didn’t have any on hand, they waited to get home to try out there new cocktail with the spiky, redolent dried pericarp. They wrote to tell us that the drink looked beautiful with the star anise bobbing on top. We could not agree more, but please do add the orange twist. It’s an important flavor component and we’d hate for you not to have the full Pushkar Sunset experience. 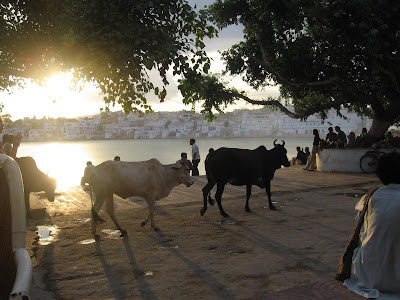 Pushkar, at sunset. (photo by Matthew Eubank and Alexis Soloski)

Method
In a mixing glass, add the first three ingredients. Stir for 30 seconds. Garnish with an orange twist and star anise. If you do not have star anise, a dash of nutmeg will do. 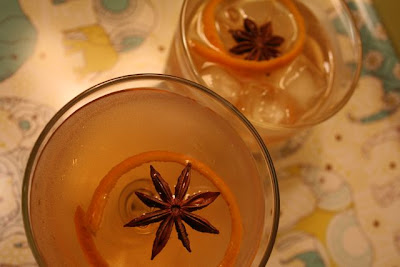 VARIATIONS:
The Pushkar Sunset is a strong drink, boozy and spicy. If you so desire, and want your drink a little gentler, we like to add ice. The Pushkar Sunset blooms when it’s served on the rocks. Add a splash of soda to create a Pushkar Fizz. Take a sip and start planning that trip to India.