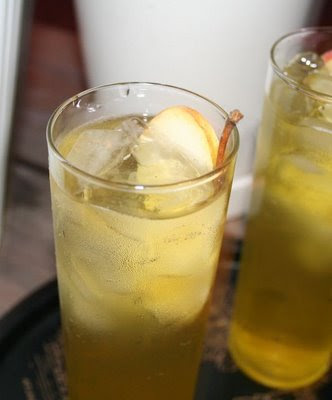 The Bank of Japan is crisp, zingy, and refreshing.

Suntory makes an incredibly smooth whisky, Yamazaki, and we thought we would challenge each other to come up with a drink that showcases its mellow smokiness. The “Bank of Japan” is the name of the first drink (we’ll explore the other at a later date), and the path we took to come up with the name was long forgotten after a few rounds of these coolers that are perfect for late summer–early fall. (Happy Fall, by the way, and we hope you enjoy the lack of humidity wherever you may be.)

Sometimes it’s difficult to mix whiskies (the flavors of most single malts can be slightly overpowering when mixed with liqueurs that cannot hold themselves up to their piquancies). Mulling around the liquor cabinet, Paul thought that the addition of Midori, another Suntory product, might just be the sweetness that this 12-year Yamazaki needed. Midori, as you all know, is a melon liqueur, and a guilty pleasure in the Schul–Zablocki household. It’s also an ingredient in The Universe, which won First Prize in the the 1978 U.S. Bartenders Guild Annual Competition, and was a favorite at the bacchanalian Studio 54. 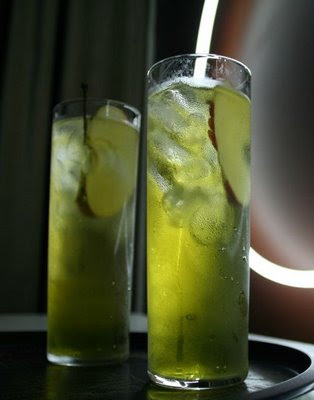 The addition of Midori did add just the right amount of sweetness, and also a tantalizing fruitiness, to the Yamazaki Whisky, but something was missing. The characteristics of what makes single-malt whisky, whisky, were now suppressed. How to bring them back? Another glance at the liquor cabinet revealed a bright yellow liqueur, recently purchased, and crying out to be used creatively. Strega! Italian for witch, and a brew of spicy, herbal wonder. Just a little bit goes a long way, so after a splash, and a few drops of Peychaud’s Bitters to round out all the flavors, we threw in some ice and garnished with a slice of pear (apple works just as well) to welcome the fall into our home. The color is gorgeous, and changes from a bright yellow, to a glowing chartreuse, depending on the light source (see photos).

Now as we enter the fall, and are sitting outside on our terrace, or back porch, or near an open window, we can sip our Bank of Japans, breath a sigh of relief knowing that in less than half an hour we’ll be ready for another one. Kampai!