The Power of Ginger: Domaine de Canton Tasting at Louis 649 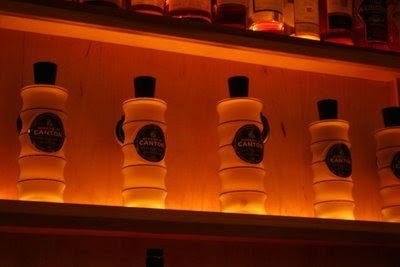 If ever there was a liqueur that captured the palates of mixologists and imbibers alike, it is Domaine de Canton ginger liqueur, a bewitching mix of Vietnamese baby ginger and cognac. The other night we were faced with five cocktails celebrating the virtues of this versatile elixir. Not only that, we got to experience a bar that was new to us. Did we drink all five? Yes (but they were not full cocktails—give us some credit). Did we like them all? Yes. And we were even blessed with a bonus cocktail from one of our esteemed bartenders of the evening, our friend from the City by the Bay, Danny Ronen (pronounced Donny), who we’ve recently dubbed our “San Francisco Treat.” Why? Because he is a wit, and after a few cocktails, wit wins the day. 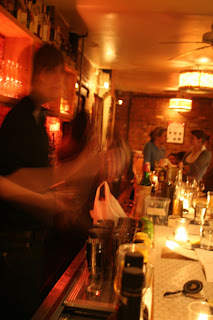 Danny invited us to the event, which was held at Louis 649, located just East of Tompkins Square Park in the mysterious nether regions of Alphabet City. Danny is the newly appointed West Coast Ambassador to Domaine de Canton, and he was eager for us to sip some ginger-spiced drinks, created by some crafty mixology–bartender types. Louis 649 proved to be the perfect location for such an event (they have these events on Tuesdays for you to become familiar with a certain liqueur or spirit, a varietal of wine, or craft beer). Although it’s located far far east of the subway, we hopped on the bus bound for the East River to avoid the bitter cold. As soon as we arrived, there was Danny, at the bar, waving for us to come in to warm up. He proffered his fist in Barack and Michelle fashion, and Paul announced to the bar, “Oh, we’re fisting now?!” A round of laughs, followed by a round of our first drink, the Ginger Rye Toddy, created by the young hipster Chris Raab of Le Poisson Rouge in NYC (he’s there on Mondays). Perfect to defrost our frozen fingers and get the blood flowing. 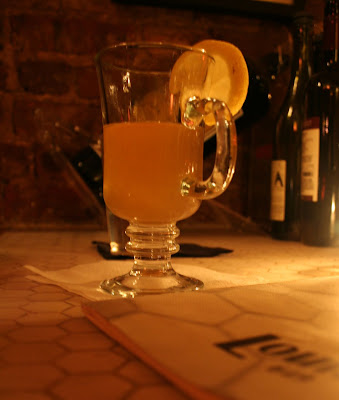 Add to a heat-proof glass. Top with hot water. Garnish with a lemon wheel.


❤ ❤ ❤
Our tour guide for the evening, the delightful Gianfranco Verga, explained to us how Louis 649’s Tuesday Night Tastings Series works. (It’s well worth the $25 you need to shell out—you will be taken care of by the knowledgeable bartenders with plenty to imbibe, and Louis 649’s ambience is comfortable, well-lit, unpretentious, and chill.) Thanks to Verga and his association with its affable owner, the welcoming Zachary Sharaga, the two expanded the character of Sharaga’s bar in the past six months by crafting these tasting events, and they have drawn new people to the space to make it a destination for cocktail lovers. Louis 649 boasts both classics and contemporary drinks (a little something for everyone), and, most important, an amazing ice machine that will keep your cocktails nice-cold, but not watered down. They have a wide collection of spirits, liqueurs, and other quaffs to imbibe, many of those which grace our liquor cabinet at home. We think we’re going to like it here! 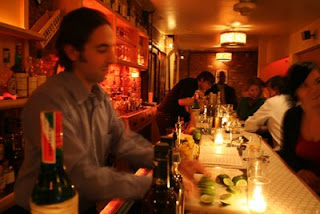 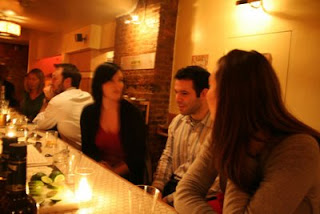 We then were tempted with the Domaine de Canton Cocktail, a drink that truly highlights the flavors of this spicy yet smooth liqueur.

Shake vigorously on ice. Strain onto fresh ice, splash with soda. Garnish with a lemon wedge.


❤ ❤ ❤
We then met the East Coast Rep for Domaine de Canton, Jennifer (JC) Craig, who warmed us up with fun facts and delightful tales surrounding the almost devotional ways people use the ginger liqueur. After chatting and sipping for a while, she gave us a delightful book on the history of Domaine de Canton, with oodles of cocktail and food recipes—the Spicy Hamachi Ceviche is already at the top of our list.

Slice the hamachi as thinly as possible and reserve slices in refrigerator. In a mixing bowl, stir together the Domaine de Canton, coconut milk, lime juice, ginger and chili paste. Season the sliced hamachi with salt and pepper and add to the mixing bowl. Gently toss to coat evenly. To serve, divide the ceviche evenly between six small bowls, garnish with basil and toasted coconut flakes. 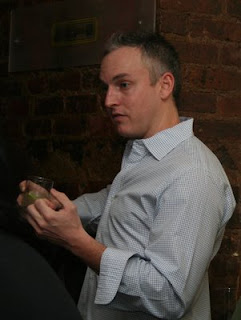 John Cooper, the developer of Domaine de Canton, arrived and JC introduced him to a crowd that already had three drinks down the hatch. (Chris Raab made us his Canton Kiss [see recipe at end of post], and yes, the cocktail is accompanied by a real kiss, but you have to ask.) John self-effacingly stated, “I can’t mix a cocktail to save my life,” but he clearly knows what he likes. When creating the ginger liqueur, he strove for “something that spoke ginger, but with a neutral pallet.” He “wanted to provide bartenders and mixologists with the right product” that would be easy to mix and draw out the flavors of a cocktail’s components, but allow the Domaine de Canton to shine. And if you’ve experimented with the liqueur, you’ll know how easy it is to work with. Its inherent spiciness is easily tamed by fresh juices, and, of course, ice. Domaine de Canton was used in our “Create Your Signature Cocktail” class, mixed with bourbon and orange bitters, by a couple who had visited India and wanted to create a drink that would remind them if its flavors. We’ve used it ourselves in a riff on the classic, and sadly neglected, Stinger: 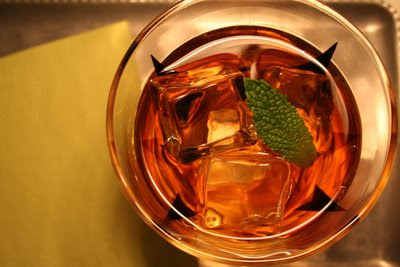 Stir all but garnish in a mixing glass filled halfway with ice for 30 seconds. Strain into ice-filled rocks glass. Add garnish.

The Rum Ginger Stinger starts out with a strong twang of menthol–mint, but as the drink progresses, and the ice slowly dissolves, the ginger quietly takes control, and the finish is a feast for the taste buds.


❤ ❤ ❤
After the speech, we spoke with John Cooper, and while we were making small cocktail talk, Danny slipped us another drink using Domaine de Canton that wasn’t on the bar list. It was developed by his friend and fellow San Franciscan, Jackie Patterson:

Stir for 30 seconds in an ice-filled mixing glass. Strain into a chilled cocktail glass.


❤ ❤ ❤
Tequila and ginger make for a dynamic duo [see also Canton Kiss recipe below], spiky upon first sip, smooth in the finish as the flavors meld and mellow. But we had to pace ourselves in this Dionysian orgy, for we had two cocktails to go, and we were already feeling the effects of long work days and little food. At the end of our evening, we were offered another drink by the reps from Domaine de Canton, but, unfortunately, had to refuse. It was almost 10 o’clock, and dinner was awaiting us at home in the form of reheated Chicken Parmesan. We waved good-bye, hopped in a cab, and blathered endlessly about what a good time we had. We’re looking forward to another Tuesday Night Tastings at Louis 649, and a stab at our new Domaine de Canton recipes. Try them and let us know what you think.

Shake first three ingredients in an ice-filled shaker. Strain into an ice-filled rocks glass. Add a splash of soda, and top with syrup. 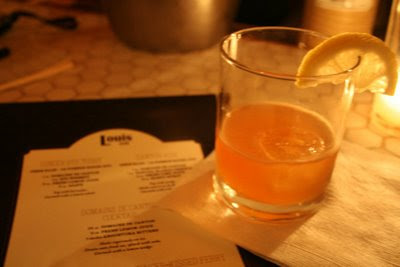