Bitters Is Better: The Bitter Truth Mingles with Bols Genever at Clover Club 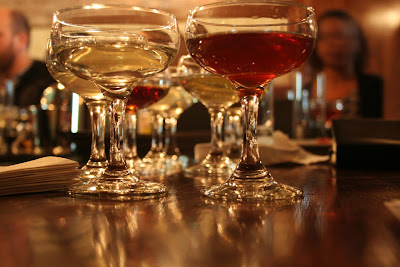 Four down, five to go, but Paul’s just sipping this time.

Let me start by saying that, although I very much wanted to, I did not even come close to finishing the nine cocktails served to me at the recent Bols Genever Classic Cocktail Series: The Influence of Bitters. Even though bringing each coupe to my lips was like tasting history, I only took two sips of each drink (three if I really liked it), and gently pushed them away from me as I listened to the estimable Stephan Berg, who cohelms The Bitter Truth company in Germany. He began his presentation, behind the bar at Brooklyn’s newish classic cocktail hot spot Clover Club, by saying, “I’ll tell you anything you’d like to know . . . except the recipe for The Bitter Truth.” For those of you not familiar with The Bitter Truth, Stephan Berg and business partner Alexander Hauck travel around the globe promoting their excellent line of cocktail bitters (Steve and I have two in our collection: Orange and Celery). They are amazingly balanced, well-crafted bitters, and have spiced up cocktails throughout the free, drinking world for several years now. Germany, which once only had Angostura bitters available, now has a host of flavoring agents to be proud of. While at the event, I was lucky enough to try the hard-to-find, small-batch Jerry Thomas’s “Own Decanter Bitters,” A piquant blend of citrus fruits and clove, derived from a recipe from the 19th century’s master bartender, Jerry Thomas. A truly masterly concoction. (I even got to try a Holland’s Pride Cocktail, made with the extinct Boker’s bitters—a rare treat, indeed!) 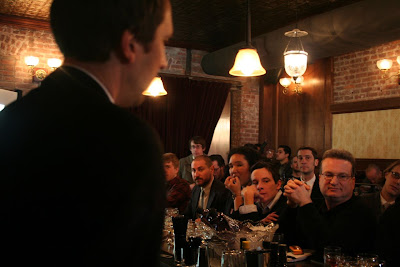 We began sipping bartender extraordinaire Brian Miller’s take on one of the first published cocktails, the Brandy Cocktail, a simple and flavorful classic, and then moved into cocktails highlighting Genever, an old-school maltwine-based gin that Bols has reintroduced to the world in the form of a smoky-gray bottle containing this unique spirit (the smell reminds one of yeasty, fresh-baked bread). Bols rep Tal Nadari had explained to us in his opening remarks the history of Bols Genever and its reemergence into the world of cocktailiana, and now we were about to taste Genever in action with our second sipper, the Gin Cocktail . The Genever truly is a revelation, closer in flavor profile to a dry whiskey than a London dry gin. Just adding a dash of bitters, some curaçao, and some simple syrup to create the Gin Cocktail was only the racehorse out of the starting gate. I couldn’t wait to see what drinks would come out next, and which ones would be my favorites.

Those that did stand out were the early Martinez Cocktail (a Manhattan essentially, but with Genever substituting for whiskey), the early Martini Cocktail (not to be confused with a current-day bone-dry Martini—this one contains Old Tom gin, a sweeter and mellower cousin of Genever, and a dash of absinthe), and the Bamboo Cocktail (a mix of dry vermouth, sherry, orange and aromatic bitters, garnished with an olive).

Method
Stir in ice for 30 seconds. Strain into a chilled coupe. Garnish with a cherry, olive, or lemon twist.


❤ ❤ ❤
During the seminar, we listened to Stephan expound the different eras of the cocktail, backed up by a photo presentation (my favorite: an old snap of bitterly stern Temperance Movement ladies underneath the banner “Lips That Touch Liquor Shall Not Touch Ours”—the poor dears looked as though they had never been touched by anyone, or anything, except perhaps the catarrh). It was comforting to see some familiar faces at this event, such as those attached to the able bodies of Erik Ellestad (Underhill-Lounge), Joaquin Simo (Death & Co., and one of Playboy Magazine’s top 10 bartenders of the year), Jonathan Pogash (The Cocktail Guru), Zachary Sharaga (Louis 649), Michael Anstendig (food and lifestyle writer), Francine Cohen (Food & Beverage Magazine), and Dave Wondrich (Imbibe!, the book). 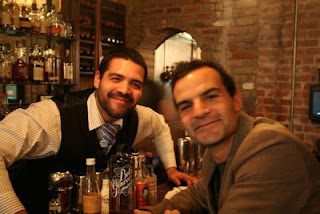 And it was equally delightful to meet some new comrades, especially the two amicable gentlemen sitting next to me: Giuseppe Gonzalez (the head bartender at Clover Club), and Chris Stanley (Foodbuzz Featured Publisher, An Exercise in Hospitality); also Greg Boehm (mastermind behind the re-release of classic cocktail books from MudPuddle Books), and the charming Julie Reiner, the lady with her finger on the pulse of the Cocktail Renaissance and owner of Clover Club. Without her help (and gorgeous bar), and the talents of Stephan, Tal, and Brian, I would not have been able to spend a sybaritic afternoon in my favorite place on Earth—Brooklyn—with some of the nicest folk around. Here’s to Bols Genever, The Bitter Truth, and Clover Club. Cheers and Bottoms Up. 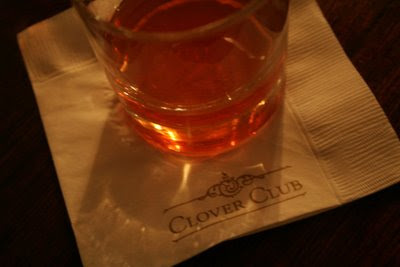 P.S. My slight hangover the next morning was only cured later in the evening by a cocktail at the new Prospect Heights bar, Cornelius. Good luck and welcome to the ’hood.

* Because the Jerry Thomas bitters is difficult to come by, you can substitute it for another bitters, such as Regan's Orange Bitter No. 6, or perhaps a combination of Angostura and The Bitter Truth Orange Bitters (you want both citrus and spice flavors). —Cocktail Buzz