When bouncing from tasting room to spirited dinner to booze-filled events at Tales of the Cocktail, New Orleans’s annual gathering of all things spirituous, one must remember to—well, we already forgot. Oh right. Keep track of all the sips that pass ones lips in order to write about it later. We've waited over a week to jot down Part II of our tasting notes, so forgive us if some information seems fuzzy. We swear we were lucid at the time. 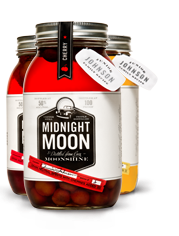 Our friends from Piedmont Distillers, the Makers of Midnight Moon and Catdaddy Carolina Moonshines, were in town to pour their new spirit infusions of Midnight Moon aged with fruit to a very eager public. At 50% abv to extend maximum flavor from the fruits and spices allowed to rest inside the bottles, the flavors are apple pie (apples and cinnamon), cherry, and strawberry (all delicious), but we swear we tried a blackberry or blueberry one too. Sarah LeRoy and Joe Michalak were on hand to answer all our questions and get us a little liquored up before our next tasting, as was bartender/author Joel Finsel, who was sharing his apple-pie mixed drink along with his new book Cocktails and Conversations.

Our spirited dinner at GW Fins was way too long, and featured too many cocktails that did not pair well with the dishes; however, the food was exceptional, and one of our favorite cocktails was created by New Yorker Jason Littrell, who came up with Behind God’s Back. This rum and juice-based drink has a long list of ingredients (it’s allowed to, since it’s a tiki-style drink), and if you’re willing to source all the ingredients, we say go for it. It paired beautifully with chef Mike Neslon’s Spicy Vietnamese Glazed Pork Belly with Jicama Relish and Cilantro Coulis.

Behind God’s Back
(created by Jason Littrell)

Method
Swizzle the syrups, orgeat, pineapple juice, lime juice, and rum with crushed ice. Pour into a Pilsner glass. Top with both the bitters, and garnish with a sprig of Israeli mint.

Imbibe Magazine threw a happy hour party at the Hotel Le Marais, and luckily we were early enough to try several of the drinks on offer, by award-winning bartenders. One that surprised us, and one that we are thinking about driving to Worcester, Mass., for to visit The Citizen Wine Bar is David Delaney’s Charentes Shrub. This tall rye cooler, mixed with Earl Grey–infused Pineau des Charentes (a French aperitif made by blending cognac with a slightly fermented grape must) is topped with India Pale Ale (IPA), and garnished with a rosemary sprig and a chunk of pineapple.

We spoke about Drambuie in our last post, but neglected to print the recipes of the two diametrically opposed flavor profiles in brand ambassador Anthony Caporale’s cocktails, in which he stressed that Drambuie was the only spirit used in both. Quite a feat.

Ingredients & Method
In a mixing tin with ice, add:

Shake until the tin is frosted, double-strain into a martini glass, float:

Garnish with a pinch of dried lavender blossoms in center.