Templeton Rye Makes Its Way Back to NYC, at a Brooklyn Bar 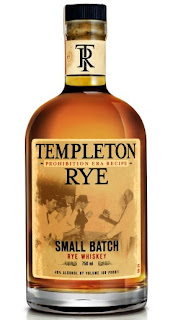 We love our rye, we love our Manhattans, and we certainly love an invitation to a 4pm Sunday Brunch. How civilized. We were promised Manhattans made with a special rye, one resurrected from the dust heap of obscurity. A rye so smooth it could make the hardest S.O.B. take pause and reflect upon the experience of sipping it neat.

We’re talking about Templeton Rye, and we had the opportunity, thanks to Laura Baddish of the Baddish Group, Gustavo Valverde of Infinium Spirits, and the kind men and women at The Richardson, to meet the makers, or should we say revivifiers, of this very special old-school Prohibition-Era family-run rye, now freed from mere footnotes of early twentieth-century history to rightfully claim its place on the top shelf at your liquor-store.

Well, that is if you currently live in Iowa, where it’s produced, or Illinois. But don’t despair yet. Both coasts will be making room for Templeton rye as early as December in New York City, and soon thereafter in San Francisco.

Why are we so excited about Templeton rye? At 80 proof, it’s incredibly smooth neat. One sip is all you need to convince yourself that the two of you will have a strong and lasting relationship. We met Brand Manager Michael Killmer, who loves sipping Templeton this way. The initial aromas of dried orange and holiday spice, which play into the palate, “open up your mouth and make you want to drink more.” True. After a few sips, we started tasting the rye’s richness: bolder maple-syrup aromas penetrated our nostrils as our lips kissed the glass, desperate for one more sip. And, according to the charming and passionate owner Scott Bush, whose forebears distilled the spirit on their farm, Templeton is made from a mash consisting of over 90% rye. “This is the Good Stuff.” Good Stuff indeed. We talked with Scott a little about the popularity of rye distilling in pre-Revolutionary War United States, and then the conversation turned to Iowa, where the business continues to be fully run. But first, some nosh.

As we partook in this “brunch” (we put brunch in quotation marks because by that point it was already 5pm) of bacon-wrapped nibblies, and lox, and what we think was Manchego cheese that paired gorgeously with the Templeton Rye Old-Fashioned Laura offered us, Keith Kerkoff, son of the man who had the secret recipe for Templeton Rye, ushered us all into the back room for a little chat. He toasted us with tales of the early days of distilling the rye, when his grandfather Alphonse’s worries consisted of “hoping the hogs don’t get into the mash.” But during Prohibition, when it was made for a select group of people (lucky lawbreaking lushes!), he had more to worry about with the Feds busting him a few times. And we all know what happened to Al Capone, who ran the Good Stuff into Chicago. All good things seem to come to an unfortunate end. Over the years, production waned as tastes changed after Prohibition’s repeal. But thanks to Scott’s determination to resurrect his grandfather’s recipe, we now are blessed by the bounty that is a bottle of small-batch, hand-labeled, luscious Templeton Rye.

Let the love flow! Have a Templeton Rye Manhattan, if you can.

(You can decide for yourself whether you want it up, or on the rocks. Bottoms up.)