Well, August is almost over, which means that summer fun is winding down. Is that a chill in the air? Maybe it’s just a cool breeze. Or maybe we’ve been holding our ice-cold cocktails for too long. In any event, we’ve been having fun experimenting with new cocktails and we’d like to share with you our results. 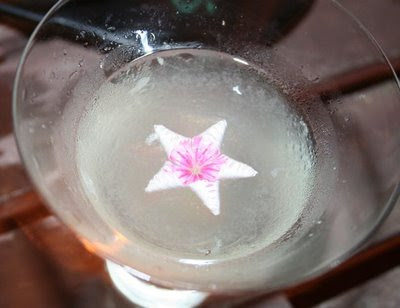 This birthday cocktail was invented in July for our friend Curt Flowers. Curt used to be our roommate, but now he lives a few floors below us and we see him all the time. Curt is a beer man; not much of a cocktailian. But of course we love to change people’s perceptions of cocktails, and Curt loves our Oriental, as well as our classic Margarita, so we thought we would invent him a new drink that would be in the same flavor profile, both sweet and sour. We named it after him, sans the letter r in his first name, and added some orange flower water and an edible flower to drive the name home. We present to you Cut Flowers. 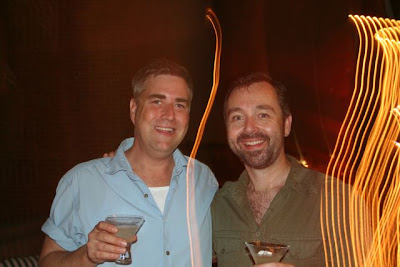 Method
Shake all ingredients except flower in a shaker filled with ice for 15 seconds. Strain into a chilled cocktail glass. Add flower, such as a pansy or dianthus. Enjoy!

And if you’re wondering, Cut Flowers go really well with chorizo sobres and, of course, guacamole.

When trying unfamiliar gins, martinis are the way to go. But what if you’re out of olives and the lemons you have resting in a bowl on your counter have softened to the point of disuse? Try another garnish, such as a cocktail onion, and you have a Gibson.

We were given some free samples of DH Krahn gin when we were at Tales of the Cocktail in New Orleans and thought we would give it a go. What a beautiful fragrance: light juniper with hints of pine. And the taste, equally beguiling.

Our Gibson uses a little less dry vermouth than most recipes, so we balance the flavors by using some orange bitters (which were originally used in early-20th-century Martinis). Plop in the slightly briny cocktail onion and you’ve got yourself a late-summer sipper that’ll pair with a variety of foods, including seafood, eggs, and herbed chicken. 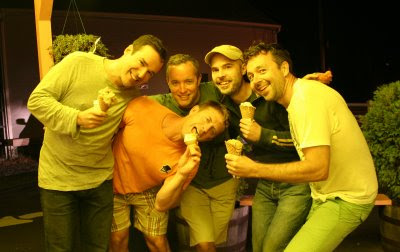 August is the perfect month to spend a weekend on the North Shore of Boston. Our friends Jim and Lou own a beautiful estate, Sunset Rock, resting on the cliffs looking out over Cape Ann, resplendent with gardens of heirloom tomatoes, luffa, eggplant, hydrangea, roses. Simply divine. The pool at Sunset Rock.

We recently spent the weekend with these food-loving gentlemen along with friends Phil and Jack. Jack brought a bottle of Plymouth gin along and wanted to make a variation of a French 75, a classic gin and champagne cocktail. So he and Paul whipped up a quick, potent cocktail using imprecise measurements, turbinado simple syrup, and lemon juice with pulp left in. The result was bestowed the moniker “Sunset Rock,” beginning with a golden cloud of bubbles and tart sweetness, ending with a concentrated gin kick!

Method
Use chilled champagne and gin. Pour the ingredients one by one into a champagne flute in the order presented above. Dangle the lemon twist over the side into the flute. 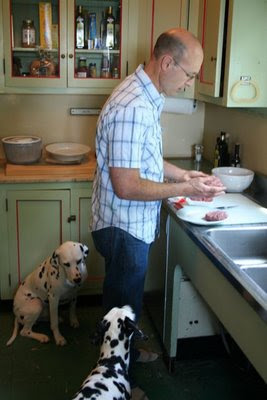 Lou tends to dinner, as Henry and Edie wait for something to drop on the floor.

The Marriage of Rum and Absinthe

Remember last month when we told you that Steve was playing with rum and absinthe, and that he invented a yummy mule. Well, here’s the recipe for a Lancaster's Mule:

Method
Stir rum and absinthe in ice for 30 seconds. Strain into an ice-filled highball or double rocks glass. Top with chilled ginger beer.

Bottoms up, everybody! Take the time to make a cocktail for a friend or loved one. Make a toast. Sip and smile. What are you waiting for? Ahhh, much better.